Home » Amy Adams and Aviana Step Out in The Big Apple

Amy Adams was photographed enjoying some time with her family in New York City on Thursday(August 30th). 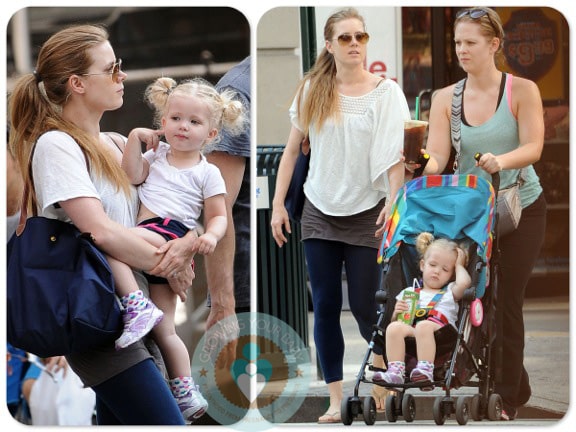 The actress looked almost unrecognizable as her famous self in a peasant top, long tee and stretch pants. Aviana, however, was as cute as ever in a white tee, navy skirt, pink sneakers and socks with hearts embroidered all over them.  Her blonde hair was up on pigtails, that were tied into buns.

Amy has been doing double duty this week, making the talk show rounds promoting her new film The Master, while also starring in open air musical Into the Woods! In Central Park.

Expect to see her on the big screen a lot in the coming months.  She has spent that last year year filming 6 projects including the Superman re-make, Man of Steel, which has had its release date moved back 6 months and will hit theaters June 2013.

At the end of their outing Aviana relaxed in a Dylan’s Candy Bar Maclaren stroller.