Home » Animals In The Womb

The Daily Mail has an incredible article about animals in the womb. The pictures they have are an excerpt from a show that will be broadcast on the National Geographic Channel next month.

Just like humans, unborn elephants are tiny but perfect in every way.   For the first time the National Geographic Channel is showing us some of these incredible images. 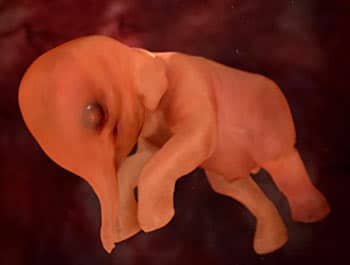 Using secret technology, the images reveal exactly how animals develop in the womb.

The team reportedly used a combination of three-dimensional ultrasound scans, computer graphics and tiny cameras, to show the entire process from conception to birth.

“These kind of images from inside animals have never been seen before,” said Jeremy Dear of Pioneer Productions, who made the film.

“We worked with dozens of zoos and animal sanctuaries across the world. There were a lot of different challenges – recording a dolphin is very different from an elephant, for instance.

“Animals were trained to sit still near the scanners and we also inserted cameras into the womb via the elephant’s rectum-But it has been worth it. It one sequence we follow an elephant developing. When it is finally born, there is not a dry eye in the house.

“The images in the film are a testament to the ingenuity and patience of the production team led by Yavar Abbas and Dr David Barlow, who worked with some of the world’s leading vets to obtain these pictures.”

Researchers used scans to track elephant calves developing for almost two years in the womb – the longest gestation period of all mammals.

It shows at 16 weeks the elephant fetus starting to look more like an elephant as the trunk develops. 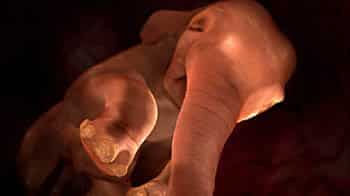 At almost a year, the trunk is longer than the legs, and by 14 months, the characteristic elephant ears are visible. They will eventually grow to almost two feet across to help regulate the body temperature of the fullymature-elephant. At birth, he will weigh nearly 260lb and be able to take his first steps in minutes.

A golden retriever puppy was shown panting with its tongue out, while still in the womb. 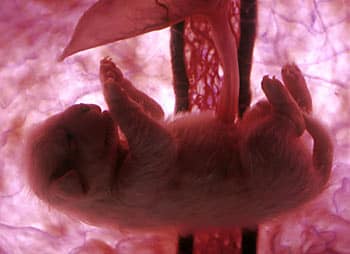 Programme makers also reveal the moment at eight weeks when a baby dolphin learns to swim while in the womb. During the next few weeks, it develops flippers, a tail and a blowhole before being born after a year, and must be able to quickly swim to the surface to take its first breath of air.

Experts also found that at 24 days, the dolphin embryo develops tiny leg-like buds, which then disappear over the next two weeks. 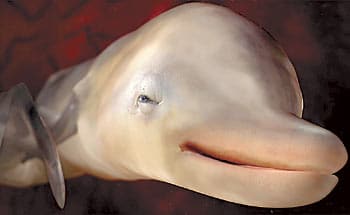 I think these shots are amazing! I can’t believe it has taken them this long to get such good photographs of animals in the womb, 3D/4D has been available for years. I can’t wait until this special airs. Watch for it in a month.