Home » Another Set Of Mismatched Twins

Earlier this month I posted a story on a set of twins that were born a minute apart weighing 3.5 lbs and 1.2 lbs.

When Jake and Tom Armstrong were born it was hard to believe that they were twins, let alone identical. 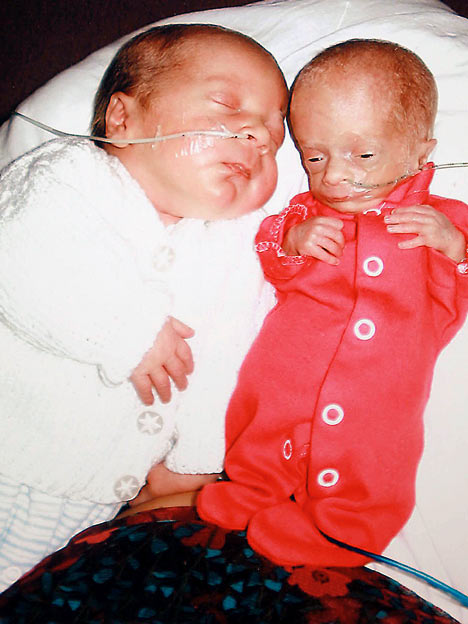 Wombmates: Jake, left and Tom after the birth

The fact that Tom even survived until the birth was a miracle, as his placenta was not functioning properly and he was effectively starving.

The babies were delivered by emergency caesarean in December 2006.

Their mother Georgina Armstrong, 35, said: “Tom was such a tiny scrap, just lying in the doctor’s hand. He was showing barely any signs of life, and the doctors weren’t going to resuscitate him.

“But then he opened his tiny eyes, and that was a turning point. It showed that he was prepared to fight.”

The couple, who live in Winchester, Hampshire, had been overjoyed when Mrs Armstrong became pregnant in May 2006.

But a scan at nine weeks revealed that one twin was a week behind in growth. They were sent to the foetal medicine unit at the Princess Anne Hospital in Southampton, where doctors discovered that Tom’s placenta wasn’t working efficiently.

This is different to the recent case of mismatched twins in Australia where the babies were suffering from twin-to-twin transfusion.

The Armstrongs refused the selective termination they were offered. 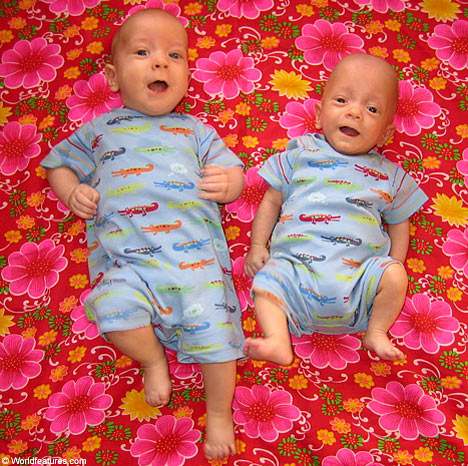 I am so proud of these parents. Doctors recommend selective reduction all of the time citing that the outcome may not be favourable for the smaller baby.

This is the second story that I have personally covered with a positive outcome. That is not to say that every baby that is not developing as fast as their twin will be okay, just that good things could happen. I would rather try to have both of my children survive than reduce and not know what could have been…