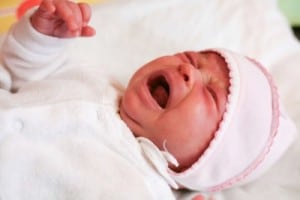 Some babies are more fussy than others when they are little. A new study suggests that infants who are fussy are more likely to have anxiety and ADHD when they are older.

Beth Troutman, a professor of psychiatry at the University of Iowa, and researchers looked at how childhood temperment in young infants could be an indicator of mental health problems later in life. Some of those problems include anxiety, attention deficit hyperactivity disorder (ADHD), and behavioral problems.

Questionnaires where sent to the mothers of 111 infants between 1999 and 2002. The mothers answered questions on how often their infants became upset, how fussy they were and how intensely they cried when upset. When these children were aged 8-11 years, they were then re-evaluated for mood and behavior problems. The researchers found a correlation between the fussy infants and children with problems.

“It turns out, you can predict very well from infant fussiness to later problems,” said study researcher Beth Troutman.

Troutman says this does not mean that every infant that is fussy will grow to have problems, however this could allow professionals a way to screen for children who will need additional help and support later on. By being aware before other signs appear, children can be monitored from an early age.

Allison Momany, an undergraduate student at University of Iowa and researchers in the study says that the way mothers respond to their fussy infants may have an effect on this correlation. She noted that in studies of rats, how the mother cares for her pups can cause them to create a more secure attachment and fewer issues.

The study is not perfect because it relied on the mothers’ perceptions of their infants as far as how fussy they were. Parents who perceive their infants as fussy may continue to view their child this way. – Summer, staff writer