Home » Are Male Contraceptives on the Way to Becoming a Possibility? 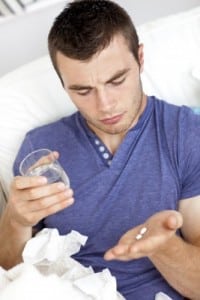 Contraceptives have always been the ‘responsibility’ of women but that may be changing in the near future. Recent studies seem to be making some substantial headway in developing contraceptives for men. These studies are not the first attempt at developing a contraception option for men. Previous studies failed to meet FDA safety guidelines, however. Male contraceptive options were also considered to be ineffective when compared to female contraceptives.

Questions as to whether or not males would even take the contraceptives if they were offered also stunted the advancement of previous studies. Thanks to the efforts of women’s organizations, surveys and global health groups, however, it is clear that men are interested in using contraceptives. Advances in scientific medicine have also been made, making male contraception a bigger possibility for the future.

When used in men, the progestin signals the brain to stop producing testosterone which, in turn, halts sperm production. The testosterone addition is needed to restore the male libido and ensure that muscle mass is maintained. This form of male contraception has proven to be effective in about 95% of males. It is still unclear as to why the other 5% are unresponsive.

There are some concerns, however, about the use of hormones. Long-term effects are not known, but it is suspected that hormone use will pose the same risks in men as it does in women. Known risks of long-term effects of hormone use in women include increased cholesterol levels, adverse effects on the heart and skin and mood changes.

Results have not all been positive either. A large trial of hormone birth control for men was recently forced to stop due to reports of depression. This particular study was conducted by the World Health Organization and co-sponsored by Conrad. The groups plan to try analyzing the effects in different doses to see if the depression problems desist.

Hormones are not the only method of contraception being studied however. Ultrasound heat to stop sperm production, scrotum injections, anti-psychotics and even new drug developments are being tested to determine safety and effectiveness. Until these methods are able to provide more evidence about their safety, reversibility or efficacy, however, they are unlikely to gain much favor among U.S. scientists.

For now, it is unclear about when any male contraceptive options will be approved and made available to the public. It is also unclear how women will feel about being on the other side of the coin – required to trust that their guy is using contraception. It is a chauvinistic gesture, however, that men are actually willing to step up and take precautionary methods to prevent unwanted pregnancy.