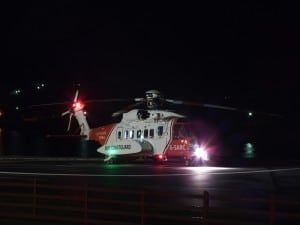 This has been the year of the unusual childbirth. Babies this year have been born in cars, airplanes, ferries, at bus stops and even a zoo!! Continuing the trend, a baby boy made his debut into the world onboard a coastguard helicopter yesterday.

On Tuesday morning a doctor in Unst, the most northerly populated island in the British Isles called for assistance, after a 19-year-old woman women went into labour. Even though the coastguard arrived just 20 minutes after the call, the baby was not going to wait. With the assistance of the coastguard’s paramedics, a baby boy, weighing just over 7lbs, was born on board 30 minutes later.

Just minutes after his arrival, the helicopter landed in Lerwick and the family was taken to hospital.

“This is the first time that a baby has been delivered on the coastguard search and rescue helicopter based at Sumburgh in the Shetland islands.

“We would like to congratulate the mother and father on the birth of their son, who is reported to be doing well.

“The mother and son were in good hands.

“It’s a lovely story. The crew are delighted.”

The baby was delivered, above a place called Lunna Holm, by winchman and paramedic Marcus Wigfull, assisted by Friedie Manson, the winch operator and paramedic.