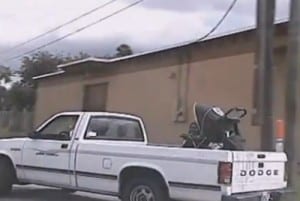 A Daytona Beach baby sitter has been charged with child neglect after being accused of allowing an infant to ride in a baby stroller in the bed of a pickup truck.

Several drivers called 911 on Wednesday afternoon after seeing the baby, who was later identified as 8-month-old Terrance McClain, in the rear of the truck.

911 operator: What is the emergency?
Caller: There’s a truck going down Mason Avenue heading east with a baby stroller in the back of the truck with a baby in it.

911 operator: Where’s your emergency?
Caller: There’s a baby back in a pickup truck while it’s driving on Nova Road southbound. 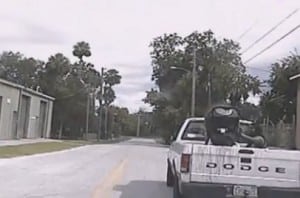 One motorist stayed with the pickup until the police arrived and pulled it over.

Police said Keyona Davis, 23, was looking after the baby for a friend when she put him in the stroller in the bed of the pickup truck with her while someone else drove.

Keyona later told a judge she didn’t understand that what she had done was wrong.

She explained she has been baby-sitting without incident since she was a teenager and ‘didn’t realize police would consider this endangering a child’.

“It’s not like they give you a handbook or anything on how — what’s neglect and what’s not neglect,” Davis said.

The public defender argued that a charge of felony neglect was too harsh, saying the baby wasn’t harmed, but the prosecution and judge said the incident was very disturbing.

The charge stands, but Davis was released on her own recognizance and ordered to stay away from the child.