I first reported about this set of twins last October. They are now a year old and still as unique as ever!

The sisters were conceived naturally to a Jamaican-English heritage dad and a white German mom.

As the sisters celebrated their first birthday, their 39-year-old mother said: “They weren’t identical twins but they looked alike when they were born. It was only when they were a few weeks old that you started to notice the differences between them.

“Millie started getting darker skinned, much more like her dad, particularly on her legs.

“At more or less the same time, Marcia also started to develop a lighter complexion and her hair also began to get blonder and curlier. 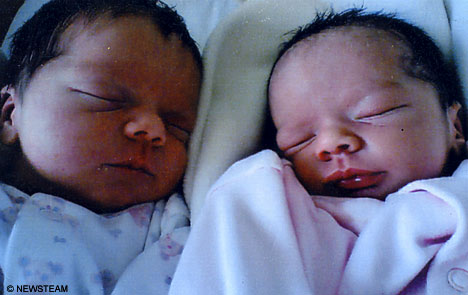 Marcia and Millie shortly after they were born

“People have said that it’s one of those unusual things to do with the genes. It’s very rare that it happens – a one-in-a-million chance. They are both well cherished.”

She and Mr Biggs, 40, a car mechanic and panel beater from Erdington in Birmingham, have been together for ten years and conceived their long-awaited children after IVF treatment. Both come from families with a history of twins. Their own set were born by Caesarean section at Good Hope Hospital in Sutton Coldfield. Amanda said: “We never knew how different they were going to look. Their different appearance settled down after a few months, but it means that Millie now looks like her dad, with black hair and dark skin, and Marcia takes after me.

“But they’re also now developing their own different personality. Marcia’s the more laid-back, chilled one, and Millie’s the crafty one.”

Jane Denton, director of the Multiple Births Foundation, said: “This is an unusual case but it is difficult to say how rare. Nobody records the skin colour of every twin in the UK. It wouldn’t be politically correct to do such a thing.

“We have 10,000 twins a year in the UK and we can expect this to happen in certain situations.

“The genes that go into defining skin colour will be different which results in a combination of genes.”