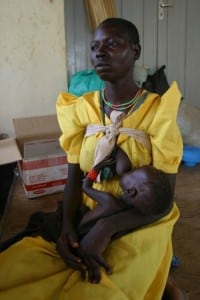 Newborns in developed countries often have the best fighting chance of survival, thanks to the miracles of modern medicine. But even some of the simplest complications can mean a negative birth outcome for children in developing countries. The most common complication, birth asphyxia – a condition in which the baby is born not breathing – causes countless newborn deaths each year. Researchers now believe they have discovered a breathing training program that can help save some of those little lives.

According to Dr. Jefferey Perlman from Weill Cornell Medical College in New York, who helped to implement the program, Helping Babies Breathe in Tanzania, reduction of infant mortality has been one of the United Nation’s Millennium Development Goals for some time now. Unfortunately, Perlman says the progress has been painstakingly slow.

According to Perlman, midwives are trained to focus on the mother right after birth, rather than the infant. However, with some simple training, the birth outcomes of infants can be improved. In his study, Perlman and his colleagues compared about 8,000 babies born at eight hospitals before the birth assistants were trained in the breathing program to nearly ten times that many babies afterwards. After teaching the breathing techniques to 40 “master trainers” from the eight hospitals over the course of two days, researchers found that newborn deaths dropped from 13 per 1,000 babies before the training to seven per 1,000 babies after the program. Stillbirths dropped from 19 per 1,000 to 14 per 1,000.

“The majority of deliveries in resource-limited areas are done by the midwife, and the midwife wasn’t really taught how to deal with a baby once they are born,” Perlman told Reuters Health. “If you can just teach them, when the baby’s born, to immediately dry the baby off…that drying and a little bit of stimulating will probably get 90 to 93 percent of babies breathing that weren’t breathing before…That’s the most exciting part, that something very simple can save many, many lives.”

A second study from Southern India, conducted by Dr. Shivaprasad Goudar from Jawaharlal Nehru Medical College in Belgaum, Karnataka, failed to see a fall in the number of newborn deaths, despite the fact that the program was taught to almost 600 birth attendants in rural health centers. However, stillbirth rates did fall from 30 per 1,000 newborns before the program to 23 per 1,000 after the training.

“We really need to focus on the early steps of resuscitation for the developing world, because that’s where most of the mortality is occurring – in other words, just getting babies to breathe,” Dr. Kattwinkel from the University of Virginia in Charlottesville, who wrote a commentary published with the new studies told Reuters. “In many countries, well over half of the deliveries occur out in the clinics and in the homes. That’s what this program is designed for. It would be terrific strategy to implement widely.”

According to Perlman, the Helping Babies Breathe Program, which is supported in part by the Laerdal Foundation for Acute Medicine, is being pursued in about 70 countries worldwide. To implement it all over Tanzania over the next couple of years, it would cost about $5 million. But in order to really make the program work, Perlman says, local government support will be needed.

“There are very few things that you can do simply that you can save, even in the worst case, three-quarters of a million (babies).” Perlman said.