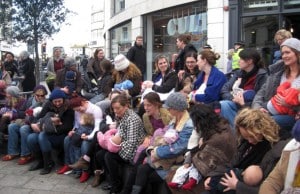 As Christmas shoppers bustled around to get their last minute shopping done on Brighton, East Sussex, 40 moms sat at the Clock Tower, nursing their infants. Not your typical holiday sight, but it was all staged in an effort to support the rights of breastfeeding mothers in Brighton and across the globe.

It all started when 38-year-old Claire Jones-Hughes was visiting her favorite vegetarian restaurant, Wai Kika Moo Kau. She had brought her four month old daughter, Callie, along. During the meal, Claire did what came natural; she nursed her daughter.

But a few other visitors at the restaurant found what she was doing anything but natural. The women approached Claire and started criticizing her for nursing publicly.

“One woman said, ‘It was very unpleasant to watch you feed. You should have covered up more,” Claire recalled. “When I protested, the others joined in, and the man said, ‘You should have used a towel.’ I was really shocked, especially as I’d gone to a lot of effort to be discreet.”

Claire couldn’t understand why she was being berated over her daughter’s need to nurse. “You usually get nice comments when you’re with a baby, and I couldn’t believe I was having this conversation,” she said. “In their world, it was completely unnatural that they should see me doing that.”

Another customer tried to support Claire, but she was so upset that she broke down into tears. Even the manager, Faruk Bulut, who says he supports a mother’s right to breastfeed where she wants and needs, noticed something was wrong. “After they left, the manager came over to ask what happened and he was mortified when I told him,” Claire said.

“The restaurant was very busy when the incident happened, so I wasn’t aware of it until afterwards,” Bulut said about the incident. “We support the idea that mothers should feel free to feed their babies and we never make it difficult for them. In fact, the café is very popular with mothers.”

After recovering from the traumatic experience, Claire started to remember all of the horror stories she had heard about the experiences of other breastfeeding moms. So, instead of letting it go, she sought online support from other nursing moms. Claire encouraged other moms in the Brighton area to brave the cold and join her with their babies in a breastfeeding sit-in at the Clock Tower.

Suzanne Borrell, local NCT committee member said about the incident and the sit-in,

“There is an assumption that Brighton is generally seen as a very tolerant, broad-minded community, but as this and previous unpleasant episodes show, nowhere is safe from such bigotry.”

Lexi, the customer services manager and a mother to a three-year-old daughter, hopes that the sit-in helps to give more mothers the confidence they need to breastfeed in public.

“I’ve had comments for all over the country about how great it is to make a stand,” she stated. “I’ve got two daughters who may have children themselves one day. If they choose to breastfed in the future, I’d never want anyone to make them feel how I felt.”