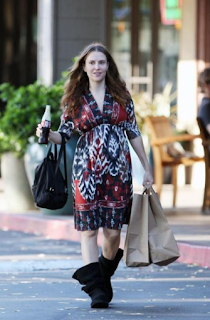 Two is officially the new one!

Everyone in Hollywood is having twins and now Brooke Mueller and Charlie Sheen are joining the multiples party.

“Brooke and Charlie are expecting twins, and they are so excited,” Moira Fiore, Brooke’s mom, tells People. “Obviously, I am floating on air.”

The grandma-to-be says that the couple “thinks the twins are boys” but aren’t sure.

“Brooke has had all day morning sickness but is coming to the end of the first trimester so she hopefully will feel better soon,” says Fiore of her 31-year-old daughter. “It has been rough for her.”

Still, “Brooke looks so beautiful,” adds her mom. “She is just glowing.”

Charlie, 42, who is already a father to three girls, has expressed interest in having a son. In August, Brooke was quoted saying that, she thought they would have a boy.

“Odds are it’s a boy, but we’ll be happy with either sex.”

The twins are due in April.