Home » Can a Premature Birth Be Predicted?

After I delivered my son 16 weeks early, I spoke to many moms in the same situation and was surprised to hear that about 90% of them were shocked by their babies early arrival. 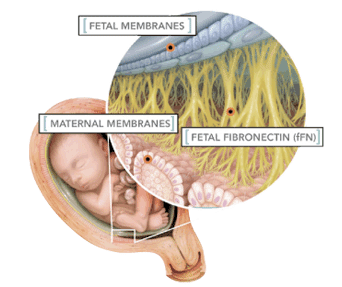 Most had been experiencing perfectly normal pregnancies before the preterm labour hit.

There is a test that I am sure most of these moms would have taken, had they of known such a thing existed.

The Fetal Fibronectin Test, is a safe, reliable, non-invasive test (similar to a Pap test) that measures the presence of fetal fibronectin. With this simple test, your doctor can tell if your body may be getting ready for delivery, even before you feel any of the symptoms.

Fetal fibronectin (also known as fFN) is a “glue-like” protein that bonds your developing baby to your uterus. It is a special protein that literally holds your baby in place in the womb. The protein is detectable in vaginal secretions in the very beginning of pregnancy, when this bond is first forming, and then again at the end of pregnancy, when your body is getting ready to deliver your baby.

For more information about this test please visit the official site at fullterm.net