It is estimated that at least 1,338 Canadian infants died from unsafe sleep risk factors present between 2009 and 2019. 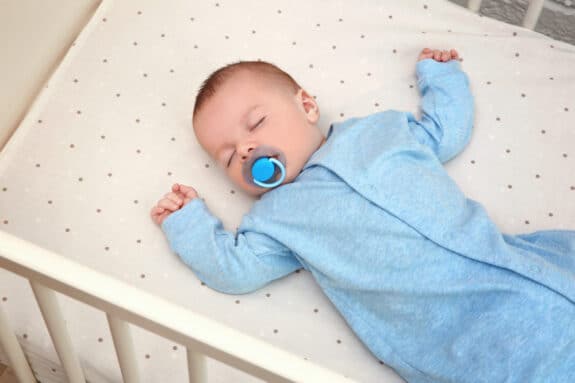 Over the last three decades, there have been a lot of public health resources that have gone into educating parents on the safest sleeping environments for their infants.

The Back to Sleep campaign dramatically decreased infant deaths in the 1990s. Through this campaign, parents were educated that the back sleep position does not increase the risk of choking and aspiration in infants, even those with gastroesophageal reflux because infants have airway anatomy and mechanisms that protect against aspiration.

Despite this, there have still been too many babies who are dying from unsafe sleeping environments.   Infants sleeping on a surface such as a soft mattress or pillows or a surface cluttered with items, or sharing a sleep space with an adult or another infant can contribute to suffocation.

While analyzing 476 infant deaths in five provinces and three territories, the CBC found that at least 61 percent of the 476 infants who died had been bed-sharing.

Additionally, in at least 77% of cases, the infant had been sleeping on a surface not recommended as safe by health officials, including an adult bed or a couch.  In some cases, they found that the whole family slept together on a mattress on the floor. They also found the baby was placed to sleep in an adult bed or on a couch after feeding.

It is common for moms who have just breastfed to share the bed with their sleeping baby. It is recommended parents use a cradle or bedside sleeper to keep their little one close but in their own safe space if they are nursing in the middle of the night.

To ensure your baby is safest during bedtime the AAP recommends: 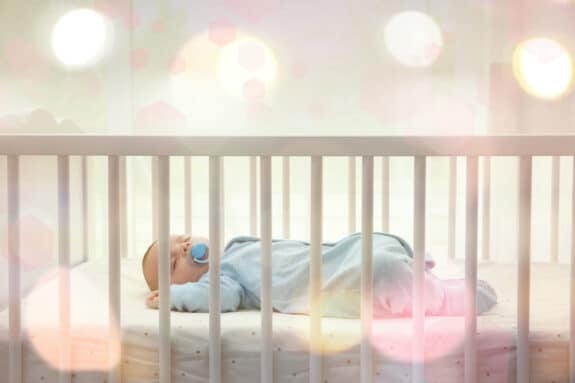 Many furniture brands and influencers share images on social media of cribs dressed with bumpers, blankets, stuffed animals, and pillows when in fact there should be nothing in your baby’s crib when they go to sleep.  Babies can be swaddled or in a sleeping bag to keep them warm on cold evenings.

While it may appear to be convenient, sitting devices, such as car seats, strollers, swings, infant carriers, and infant slings, are not recommended for routine sleep in the hospital or at home, particularly for young infants. Infants who are younger than 4 months are particularly at risk, because they may assume positions that can create a risk of suffocation or airway obstruction or may not be able to move out of a potentially asphyxiating situation.

Parents should also ensure that baby monitor wires and blind cords are not near the crib as well.