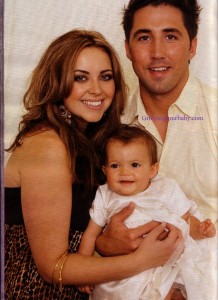 The event, which was low key, was attended by just 20 friends and family.

During an interview, that took place before the christening, the couple spoke about expecting baby #2, pregnancy cravings and Ruby.

To Gavin: Were you shocked to find out baby #2 way on the way?

A little bit. We didn’t plan for it to happen, but I am really glad it did. We like being young parents, so if we’re planning on having quite a few then we needed to be started!

Actually just nice fresh salads, which is better than lasagna which is what I craved last time! Lasagna and spaghetti bolognaise.

Now that Ruby is Nine Months old, how is she doing?

She is such a good baby – she sleep from 8pm to 8am. She’s and angel. I think that’s why we’ve had another so quickly.

How do you think that you’ll cope with two really young children?

C – All we can hope for is we have another one like Ruby. G – When Charlotte was pregnant with Ruby, everyone was say your life’s going t0 change, it’s going to be hard, but it’s been Brilliant. Now they’re saying: “Two under the age of two – it’s going to be even harder.” I guess we’ll have to see.