Home » Clay Aiken Introduces Us To His Son Parker 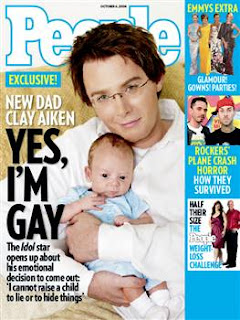 Clay Aiken holds his son Parker Foster Aiken in a photo featured on the cover of the Oct. 6, 2008 issue of People magazine.

In an exclusive interview to the Magazine, Clay explains why he decided to reveal that he was gay.

As for his own child, the new dad told the magazine that Parker – who was conceived via in vitro fertilization with his best friend, music producer Jaymes Foster – will be raised in an environment that is “accepting and allowing him to be happy.”