Colin Farrell was on daddy duty on Wednesday.  The actor was photographed carrying his son Henry‘s school gear(and shoes) while picking him up from school. 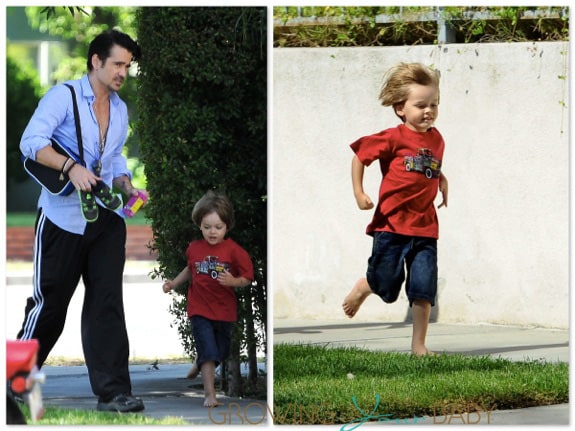 Often spotted coming from yoga class, Colin was dressed in a barely buttoned dress shirt and athletic pants.   An energetic Henry ran barefoot down the sidewalk in jean shorts and a red tee.

Fresh off press rounds for his new movie EPIC, the Irish actor revealed that he hopes his boys like the animated fantasy-adventure flick.

“It’s lovely to be able to do something my kids can go and see for sure,” he says. “I have two sons so it will be nice if they like it. I mean they don’t have to like it of course. If they don’t like it the first time I’ll tell them it gets better with the second viewing.

The single dad shares custody of Henry with ex-girlfriend Alicja Bachleda-Curus. He is also dad to nine-year-old son James, with whom he had with model Kim Bordenave.