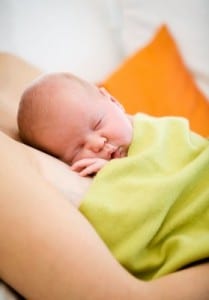 This month, think about your baby’s heart most of all. February 7-14 is Congenital Heart Defect Awareness Week, a week to think about this little tested for condition that can be such a traumatic experience for newborns and their families.

Few babies are tested for CHDs, despite the testing being so available. CHD is the number one killer of newborns, however only 1.8 percent are routinely screened after birth for the potentially fatal condition. A recent survey of babies who were diagnosed with CHDs found that only two out of five were actually screened after birth. Those screened were ones who had been diagnosed before birth or showed symptoms shortly after birth. These numbers are shocking according to the group that took the survey, Little Hearts, Inc., a national organization that provides support, education, resources, networking and hope to families affected by congenital heart defects.

“Some hospitals in some states have adopted CHD screening for newborns, but we need to see screening implemented nationwide,” says Lenore Cameron, President and Executive Director, Little Hearts, Inc. “We’ve seen too many babies die as a result of a CHD – babies whose lives might have been saved if only they were diagnosed sooner, which is possible with a simple pulse-oximetry test that can produce results within minutes.”

The test, called pulse oximetry(OX), is a small sensor taped to the bottom of an infants foot. Painlessly, the sensor sends a small red beam of light at the foot and checks the oxygen saturation level in the blood. A normal pulse ox test would be 98 to 100. Anything under 95 is too low and babies with CHD have low oxygen saturation readings because their hearts do not get enough oxygen in to the blood. The test takes just a minutes, and gives doctors a chance to catch potential heart defects before the family even leaves the hospital.

Congenital Heart Defect Awareness Week is an annual awareness week to let the public understand more about this fatal condition and the testing that could help diagnose and treat infants before it becomes fatal. CHDs occur when the heart fails to develop properly, often for a variety of reasons in the womb. Parents need to be aware that this condition can be present without showing any outward signs for several days. Sometimes, not until it is too late. This was the case with one mother, Kristine McCormick, whose infant died suddenly from an undiagnosed heart defect. One that a simple test could have discovered.

According to Little Hearts, 40,000 babies are born each year in the United States with a heart defect. – Summer, staff writer