Christy Henry was four days overdue when her contractions began. As her husband Matt sped to get her to the hospital, it was not the hospital but the front seat of her SUV that turned into the delivery room for their new baby. 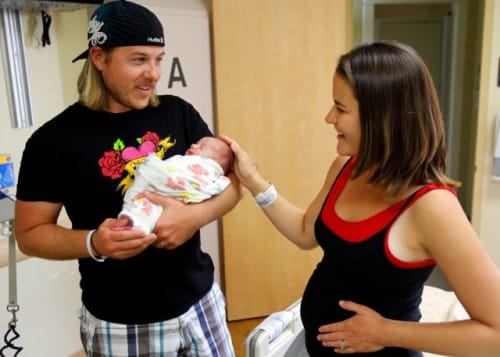 29 year old Christy runs the children’s ministry at EastLake Church in Imperial Beach, where Matt is a pastor. She woke her husband in the middle of the night early Friday morning when she began feeling her contractions. The couple are already parents to a 22 month old Ryder and Matt went to drop him off at a friend’s house. When he returned, however, Christy’s contractions had worsened to the point where she was almost unable to make the walk to their vehicle.

Knowing they didn’t have much time Matt sped up the Interstate towards the hospital, but the baby had other plans.

“All of a sudden, I hear what sounded like a loud water balloon popping. She said, ‘My water just broke,’” he recalled. As he sped faster, he heard the words, “I just had the baby.”

Matt looked over to find Christy holding a baby boy!

“It’s 2:03,” Christy told her husband, noting the time on the dashboard clock.

Matt called 911 but kept driving till he reached Kaiser Permanente hospital in San Diego. As soon as the car stopped, he announced the baby’s birth in the car and hospital staff and waiting room patients swarmed their SUV to have a look at the boy who just couldn’t wait to enter the world.

Recalling his wife’s amazing experience of delivering a baby on the front seat of a Toyota RAV4 while it was speeding on the freeway at 85 mph, Matt says,

“My wife is such a rock star, to deliver her baby into her own hands.”

At East Lake Church in Imperial Beach, the congregation will be able to meet speedy Liam on Easter Sunday.