Here is a pair we haven’t seen in a while! Gabriel Aubry was spotted yesterday at the Pan Pacific Park in LA playing with his daughter Nahla. 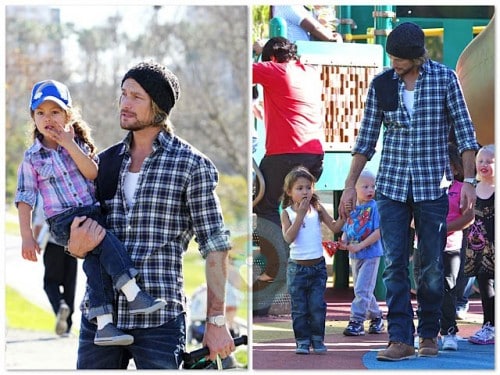 The pair were cute in matching plaid shirts and jeans, while out enjoying a nice sunny California day. The doting dad carried Nahla’s scooter and her on his shoulders as they made their way to the playground.

They also appeared to be on a playdate, arriving with another mom, who was there with an infant and a little girl Nahla’s age. The girls played on the swings together and grabbed some ice cream.

Gabriel and Nahla’s mom Halle Berry have been locked in a court dispute for almost a year now, with the actress requesting full custody of the pre-schooler.

Hopefully they will be able to come up with an arrangement that allows both of them to spend time with their little girl because she clearly loves being with her dad.