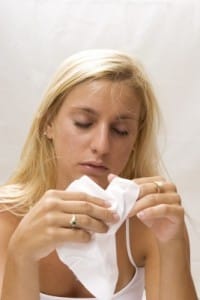 When medications are sold over-the-counter (OTC), it’s easy to assume they are safe. But when you go to your first prenatal appointment, your doctor probably gave you a list of OTC drugs you should avoid. Now that a group of researchers have found that there may be a link to decongestants and some rare birth defects, they may be soon added to that list.

Spanning over more than 17 years, the data for this study, which is the first to examine the risks of decongestant use during pregnancy, came from the Slone Epidemiology Center Birth Defects Study. A total of 12,734 malformed infants and 7,606 non-malformed control infants were included, and mothers of the infant participants were interviewed regarding their use of decongestants during the first trimester. Nurses recorded their answers, and the team, led by Dr. Allen Mitchell, analyzed their answers.

Published in the American Journal of Epidemiology, the study found that decongestants, particularly pseudoephedrine, are the most commonly used OTC medications during pregnancy. Additionally, they did find an elevated risk for certain birth defects in the infants born to mother that had taken them.

Despite the elevated risks, however, researchers say that the risks need to be put into perspective. The risks are still very rare, even if decongestants increase the chances of a defect.

“As one example, the baseline prevalence of endocardial cushion defect is about 0.34 per 1,000 live births; thus, even if phenylephrine exposure increased the risk eight-fold, the absolute risk of having an affected child would still be small (about 2.7 per 1,000 births; i.e., 0.27%),” the authors wrote in the medical journal publication.

Authors did not find an elevated risk for defects such as clubfoot or eye and face defects, despite what other studies have suggested previously. However, Dr. Mitchell believes there’s more research that needs to be done in the area of decongestant use during pregnancy and birth defects, especially when the wide use of these OTC drugs are taken into account.

“Given the widespread use of decongestants by pregnant women, there is continuing need to obtain further data on the risks and relative safety of specific decongestants in relation to the wide range of specific birth defects,” the authors wrote.

Still, Dr. Mitchell warns that, in the meantime, mothers need to think about what they are taking while they are pregnant. Being sold OTC doesn’t make a drug safe to use during pregnancy.

“The fact that medications such as decongestants are typically and widely available for use without a prescription and do not require consultation with a healthcare provider should not be assumed to mean they are safe with respect to the fetus, since there are still relatively few studies that examine the risks and relative safety of these ‘over-the-counter’ medications, which are more widely used in pregnancy than prescription medications,” he told Reuters.