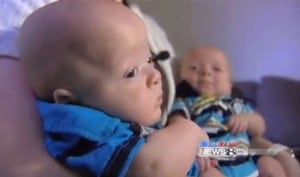 Five-months pregnant, Aimee Donley found out that the twins inside her womb had a rare condition where one baby was receiving all the share of blood. Doctors assured her that a new surgery could save at least one of the brothers. Luckily, both the babies were saved and are now five months old.

Aimee, who lives in Fort Worth found out that her babies suffered from a condition called twin-to-twin transfusion syndrome (TTTS). Both the babies were sharing the same placenta and while one was getting dangerously overloaded with blood and food, the other was starved. The condition occurs in about 15 percent of identical twins.

Aimee thought then that she would be losing her babies. But a new surgery that is still not widely performed in many hospitals gave her a ray of hope.

“We felt like there was a decent chance to save one, if not both of them,” Donley said.  “And that’s why we decided to go ahead with the surgery.”

Two days later, Aimee was admitted to Texas Children’s Hospital in Houston for the in-utero operation.

The operation involved forming two placentas for the two babies instead of one so that both had their sufficient blood source without deprivation or overload.

Explained Dr. Anthony Johnson, a fetal interventionist at the hospital, “What we do — for all intents and purposes — is create two placentas. We separate them. Now the one twin which we call the ‘stuck’ twin or the ‘donor’ now has its own placenta and has to sustain itself. The ‘recipient twin’ — who has been in heart failure — now can resolve the heart failure, because he no longer has the volume coming from the donor.” 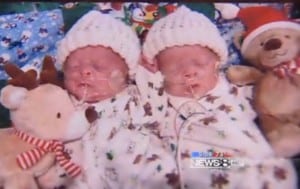 Thankfully the babies survived the operation although they were born prematurely at 27 weeks just three weeks after the surgery.

The twins named Luke and Jacob were just 2 pounds and 3 ounces each at birth. They joined their older brother Gavin who is 18 months old.

The Donleys consider themselves very lucky as both the baby boys were saved.

In December last year UT Southwestern in Dallas also performed a similar procedure where twin girls survived the operation but such cases are still not common. The Donley twins are therefore extremely lucky indeed.