Home » Do Pacifiers Interfere With Breastfeeding? 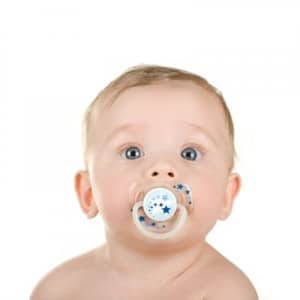 Breastfeeding mothers are commonly told not to introduce pacifiers to their infants because it can cause them to have issues with feeding. But a new study suggests this may not be the case. Are pacifiers as bad as they are made out to be?

Two studies were combined to get the results of this new information on pacifiers. Over 1,000 breastfeeding mothers were used in these studies to see if pacifier use had any effect on breastfeeding. Of the mothers, half were counseled to offer a pacifier to a crying baby as a way to reduce the baby’s cries.

Researchers found that breastfeeding rates were the same for both groups of mothers. Introducing a pacifier into the breastfeeding relationship did not seem to affect how long the babies continued to breastfeed. The researchers suggest that is mothers wants to use pacifiers, they should be able to do so without fear of it causing issues.

“We recommend that until further information becomes available… mothers who are well motivated to breastfeed be enabled to make a decision on the use of a pacifier based on personal preference,” the review authors concluded.

The World Health Organization warns against using pacifiers because it can affect ho0w a baby suckles. Pacifier use causes a child to have a shallow suck, which can make breastfeeding more difficult. According to the WHO, others studies have found a connection between pacifier use and early breastfeeding weaning.

Are pacifiers really as bad as they are made out to be, or is there a real connection between pacifier use and early termination of breastfeeding? Research on both sides of the issue seem to point to their own conclusions. For now, mothers will have to follow their own instincts and what works best for their babies. – Summer, staff writer