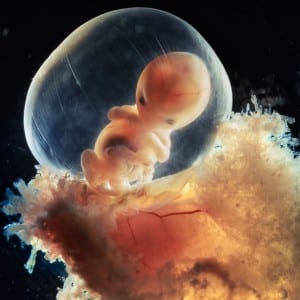 While there is still a lot that researchers don’t know about miscarriages and why they happen, knowledge continues to grow. Now added to that pot of knowledge is a recent study where researchers found that miscarriages were more likely to occur when an embryo displayed limited growth during the first trimester of pregnancy.

For the study, researchers in Nottingham followed the growth rate of 247 single embryos and 264 twin embryos. All embryos followed were implanted through IVF. This allowed the researchers to calculate the embryo’s exact gestational age, which was essential in comparing their growth rates.

To determine the size of each, they were measured from the top of the head to the buttocks in an ultrasound during the first trimester. All embryos were then monitored until birth.

Using their measurements researchers took a look at which fetus’ survived until birth and which ones had been lost during pregnancy. Based on their calculations, the measurements from that first ultrasound could provide a pretty good indication as to whether or not the embryo would survive.

Of the singleton births, 77.8% of the embryos miscarried fell within the smallest 5%. In those that were not considered “growth-restricted,” only 1.9% of resulted in a miscarriage.

Still, researchers on the study say that there is definitely something different about the connection between embryo growth and miscarriage rate for twins. Twin embryos grew at the same rate as single embryos during the first trimester, which was a bit of a shock to the researchers. This indicates that there is still much research to be done on how and why miscarriages happen.

“There are various reasons why some embryos show restricted growth in the early stages of pregnancy. It could be down to an abnormality in the fetus or something in the environment of the womb,” says Dr. Shyamaly Sur, leader of the study. “More research is now needed to investigate the relationship between growth and the underlying cause of miscarriage in more detail. We are focusing on how blood flow to the womb lining and embryo quality influence the conception rates and subsequent miscarriage.”

Dr. Raj Mathur, consultant gynecologist at Addenbrooke’s Hospital in Cambridge agrees that more research is definitely needed, but he also says that there are other factors that need to be considered when looking at the miscarriage risk in women.

“We also need to consider the woman’s health history, look at the picture of the whole woman,” Mathur stated. “This study adds to our knowledge about risk, but we also need to look at blood supply to the embryo and whatever genes are passed on from the father too.”

Presented at the British Fertility Society annual meeting in Leeds, the study should help doctors identify pregnancies that are at a higher risk for miscarriage, even if there are other factors and more research needed. After all, one step in the right direction is still one step further.