Home » Single Surgery Heals Baby with Organs Outside his Body 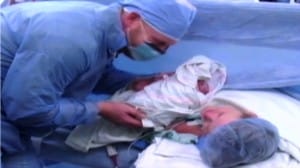 When Kelly Davis gave birth to tiny Hayes Davis on March 25th last year, she already knew that her son would have a defect that would make him different from other newborns. Hayes was born with his intestines and other abdominal organs sticking out from the belly button. Last Friday though, the baby boy got a new lease of life when doctors rectified the defect with one surgery that’s equally uncommon.

During her 12 week ultrasound her baby’s rare defect known as omphalocele was discovered. In as many as 10,000 births the condition is seen although in Hayes case, it was all the more pronounced. 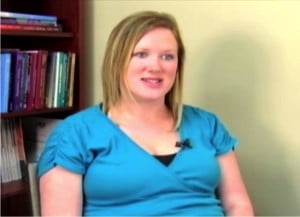 Kelly gave birth to the baby boy on March 25 via Caesarian section at Children’s Memorial Hermann Hospital in Houston.

‘Once we heard the word “omphalocele” it was our world,’ said the mother. ‘I was so excited to meet him, but the anxiety was almost overwhelming,’ she said. ‘I didn’t know if he would breathe on his own or eat on his own or whether the omphalocele would stay intact.’

Over the next nine months Kelly kept a blog about the progress Hayes was making despite the condition.

Dr. Kuojen Tsao decided to go for a single surgery that allows for a reconstruction without a separate flap of skin and also restores the structural support of the abdominal wall to protect the organs once they were back inside the body. 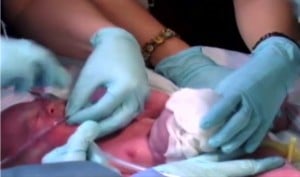 Normally several surgeries are required in a case like this to tighten the abdomen and stretch the skin but in Hayes case the doctors waited for more tissues to grow and then perform a single surgery.

“It’s not necessarily a new technique, but it’s new to these problems in babies,” said Dr. Tsao. “Surgery always has risk involved. We wanted to try and get back to doing just one surgery to fix the condition.”

He also explained the reason for the decision.

‘Every time you go in again, there’s risk of injuring the bowel and liver, there’s blood loss, and then that baby is going under with anesthesia. We figured if we could do it once to fix the problem, we decrease the amount of risk.’

The doctor added that while it was possible to live with the organs outside the body and there are several children who have done it, it is not an easy thing to deal with.

‘There are definitely kids who have walked around with this sac-like belly,’ added Dr. Tsao.’It’s not impossible to manage, but it’s certainly a different beast.’

The surgery on Hayes was performed last Friday in Texas.

“The surgery went perfectly,” Kelly said. “Both surgeons were incredibly pleased. We’re looking forward to a simpler way of life.”

But she also adds,

‘If I could rewrite our story, I wouldn’t change a thing about it.’