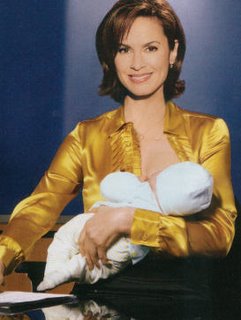 Elizabeth gave birth to her son Samuel Wyatt Cohn on August 16, 2006 and was probably doing an interview about juggling work and a new baby. That is were there breastfeeding at the anchor chair likely came in.

The controversial photo accompanies the interview with Vargas for the December issue.

A source close to the anchor says Vargas’ is disappointed but has a sense of humor about the whole thing.

“Elizabeth was more than happy to sit for the interview but was disturbed that the magazine would set aside basic journalistic standards to photoshop her head onto a fake image. Vargas did joke that her real baby is cuter, that she is proud to breastfeed her newborn but wouldn’t do it at the anchor desk and that she wouldn’t be caught dead in that ugly gold blouse!”

A MARIE CLAIRE spokesperson counters: “There isn’t a working mother who can’t relate to this image and immediately identify with the very real dilemma Elizabeth Vargas wrestled with. We do not believe anyone seriously thought she would nurse and report the news the same time! This is an image illustration and is stated so with the byline of this story. We only want to make the point that women choosing between their career and being a parent is a tough decision that we are very sensitive to. We at MARIE CLAIRE think that Vargas is a great journalist and we look forward to watching her on 20/20. We are also grateful for her interview, which we hope reaches the many women who can relate to this serious topic.”