One couple’s rainbow baby defied the odds after her record-setting birth weight had doctors fearing the worst.

Emirati couple Fatema Omar and Ahmed Huseein Saleem, had lost their first baby to premature birth.  When she got pregnant with her second baby everything seemed fine at the beginning.  Complications and pain sent her to the emergency room where she gave birth very quickly at just 23 weeks of pregnancy.

“It was the scariest day of my life,” Fatema recalled. “I just felt very uncomfortable and I feared maybe I had lost my second pregnancy, like my first.”

Baby Latifa was born on June 24, 2020, at the NMC Royal Hospital, Abu Dhabi weighing only 250gm.   Believed to be one of the tiniest on record to survive premature birth, doctors had told her parents their baby had only a few hours to live. 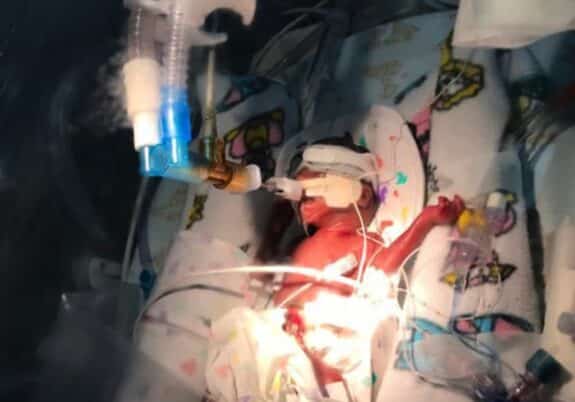 Baby Latifa was so small, she could “fit in the palm of the hands of her care team”, said Dr Ritu Nambiar, a specialist gynecologist at the hospital who helped deliver the baby. “She is a miracle, there is no doubt about it. After the birth, the hospital’s advanced life-support team, led by consultant and head neonatologist Dr Wilson Lopez, worked to stabilize Latifa before she was transferred to the neonatal intensive care unit.”

A team of experts then cared for the newborn around the clock during her five-month stay in the NICU.

“Unlike the world’s tiniest baby (born in the US in 2018), who survived as she did not have any major life-threatening complications, Latifa, although weighing just 5gm more, had an array of complications,” said Dr Lopez.

During her stay in the NICU Latifa’s waited to hold her in their arms. “The doctors allowed us to hold the baby for an hour after two months of her birth. We used to visit the hospital daily, sit for an hour or more, hold her and take care of her. My wife used to feed her milk as well during this time. Doctors also helped us learn Kangaroo Mother Care,” said father Salem beaming with joy.

The resilient little bundle of joy fought hard to grow stronger and was discharged on December 17, 2020, weighing a healthy 3.825kg(8.43lbs)!