I refused the epidural with all five of my children, and not just because the thought of a needle in my back frightened me. I also had concerns that it would stop or slow my labor. Turns out, I’m far from alone. Just one in three moms receive the epidural while in labor, and many express the same concerns as me – why wouldn’t they? The current belief is that an epidural can slow or even stop labor, and that’s been the consensus for decades. However, a new study suggests this may not be true. 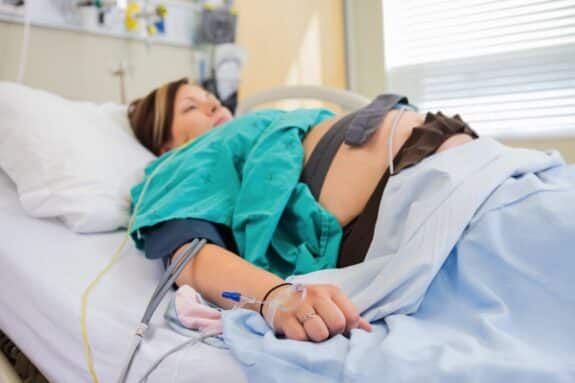 More than 400 first-time mothers participated in the new study. All the mothers were given an active epidural and an analgesic pump that they could use to control the medicine while going through their first stage of labor. When they reached the second stage, some mothers received the epidural while others received a saline placebo. None knew what was being administered to them, but the researchers tracked their labor times to determine if there was any difference.

Overall, researchers recorded only a 3.3 percent difference in the duration of second stage labor for each group of mothers. Average times were also extremely close.

“We found exchanging the epidural anesthetic with a saline placebo made no difference in the duration of the second stage of labor,” Senior author on the study, Professor Philip Hess, told the Telegraph. “Not even the pain scores were statistically different between groups. However, pain scores in women receiving the saline placebo increased over time, as would be expected.”

Researchers also noted that the odds of receiving an episiotomy, a small incision that allows for easier or faster removal of the infant in certain situations, did not increase when the epidural was received.

Still, there is enough data on the potential delay of labor after an epidural to warrant further study. There could also be limitations in this specific study. For example, the duration of labor may not have been compared to women who never received the epidural – not even during the first stage of labor. Furthermore, it does not appear that the researchers tracked the entire duration of labor; it is still possible that the third and final stage could be delayed slightly. Also, the researchers themselves have indicated that further studies should be done.

“We didn’t see any negative effects, but epidural analgesia in the second stage of labor remains controversial and merits follow up studies,” Hess said.

For now, though, women should speak with their doctor about their birth plan, including what may happen if labor does slow or stop to the point that it puts either mom or baby in danger. In all honesty, even natural birthing mothers should have a backup plan, just to be safe.