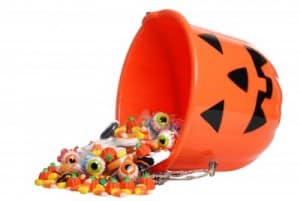 If this is your first child, you’re likely to soon learn that almost nothing is out of reach from a determined toddler. As an example, I love telling the story of my oldest son. He was 18 months old at the time and Halloween had just ended. To keep him from eating all his candy in a day, I left it on top of the refrigerator. About three days after, I had left him to play in the living room while I went just ten feet or so away to switch the laundry over. I couldn’t see him from where I stood because a wall jutted out between the laundry area and the kitchen. The living room was just on the other side of the kitchen. Every once in a while, I would peek my head out, just to make sure he was okay, even though I couldn’t actually see him. I focused on getting the laundry done as quickly as possible. Once finished, I headed out to the living room. When I didn’t see him, I panicked. Turning back towards the kitchen, I noticed him, sitting on top of the refrigerator, eating his Halloween candy. To this day, I have no idea how he got up there, but sure as the sky is blue, he was there. Thankfully, it was just Halloween candy. 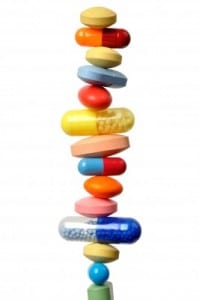 Toddlers are constantly taking in the world around them. At this age, that means climbing, placing everything they touch into their mouths. Their little fingers are agile and their bravery knows no bounds. These inquisitive months are often a lot of fun, and oftentimes a lot of mess. But sometimes, that inquisitive nature can get a tot into trouble, especially when they start rummaging through “adult areas” – those areas that you think are safe, like medicine cabinets and inside cupboards. Just mere seconds in one of these areas can have serious consequences. As parents, we need to protect our children, and that means making a conscious effort.

According to a recent poll, conducted by Leger Marketing, commissioned by Safe Kids Canada, 98 percent of parents with children under the age of 14 believe that it’s important to lock up medication and household cleaners. Yet, half of them admitted to storing medications in a simple medicine cabinet and more than half stated that they keep cleaners underneath a sink.

“I think some people may think the child-resistant caps on medications will keep kids out of the product,” said Pam Fuselli, executive director of Safe Kids Canada. “Unfortunately, they’re not child proof. They’re only child-resistant and children are very curious and they can actually get those caps off, given enough time to get into them.”

Selina Esteves discovered this truth after a huge scare. She had put her three-year-old son, Hudson, to bed one night and had headed downstairs to help her older son with his homework. Less than half an hour later, her husband, Jeff Green came home from a dinner party. At the time, Selina was nothing more than surprised that little Hudson had gone to bed so easily, but as her husband headed upstairs to change for the night, her surprise turned to fear.

“We freaked out,” Selina said. “He was able to open the child-resistant caps, no problem. And it happened so fast. The difference between ‘night-night’ and Jeff going upstairs was 25 minutes. Luckily, he came home very early.”

Thankfully, little Hudson ended up being okay after his little adventure through the family’s medicine cabinet. But not all children are so lucky. In Canada alone, an average of 7 children die every year from accidental ingestion. Another 1,700 are hospitalized with serious injuries.

“From the phone calls every year, we’re still seeing huge numbers of kids being exposed an unintentionally getting into poisonous products in their homes,” said Fuselli.

But the problem isn’t confined to Canada; far from it, actually. In just a matter of months, nearly 250 cases of children ingesting laundry detergent packets have been reported in the United States. These packets carry serious risks to young children, including breathing problems. More than twice as many children are being taken to the emergency room for battery-related injuries, again, in the United States. Magnet balls tore a hole in a little girl’s stomach earlier this year.

It is quite clear that we need some help figuring out how to keep these products away from our children. And again, if you’ve ever met the determined toddler, you know just how difficult this can be. There are, however, some solutions:

Fuselli also says that parents should never call medicine “candy.” Already a danger because of its flavor, children may misinterpret the use of medications given to them and actually attract children.

“If you refer to it as candy to try to get them to take it, they will not be able to distinguish between true candy and the medication and they may take it themselves while you’re not around,” Fuselli said. “And don’t take medication in front of kids – they may seek to imitate you.”

“A number of medications that are formulated for children, the manufacturers are trying to get children to tolerate them, so they add a flavoring to them to make them more attractive, to make them finish the appropriate dose,” said Dr. Thompson. “It tastes like grape or bubble-gum, so they desire that sweet flavor.”

She added that, in many instances, the accidental ingestion of medication occurs right after a child has watched a parent take a medication or right after they themselves have been given medication and the parent has turned away.

“That’s when most of these things happen, just after they’ve been used,” Thompson stated. “That’s the critical time. It’s not that kids go climbing up into a cupboard – some of them do – but the majority are when the parent inadvertently left it on the counter and may have forgotten to put the top back on or may have forgotten to lock it back up again.”

Well, I don’t know about most kids, but I know that ALL of my children climbed into cabinets. Not all of them scaled a refrigerator, but they’ve all found their way into at least the bottom cupboards. They can all climb to the medicine cabinet now, and my youngest is not quite three. In a matter such as this, I figure it’s better to be safe than sorry.