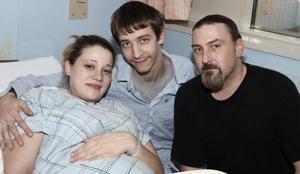 Todd Pritchard, a Fort Erie resident, helped deliver his second grandchild when his daughter-in-law, Sarah Alcock, unexpectedly went into labor while at home.

Todd recalls that morning he was up early when Sarah came down the stairs complaining that she was in pain.  To keep her comfortable, he made her some tea and had her to sit upright in a chair.  That’s when he noticed that she was having contractions.  Once they started happening closer together he woke his wife and son and called then local hospital to let them know they’d be on their way.

“Sarah stood up and she says, Oh I feel something, so we checked and the baby was already crowning, so at that point we said we better call 911 instead – we’re not going anywhere, take the coats off”.

The grampa-to-be called 911 and the operator instructed him on how to handle the situation until the emergency response team could get there, but the baby just couldn’t wait.


“I just finished wiping my hands with a sanitizer and I stepped over and I placed my hand over the head of the baby and she gave a push and the head came out. I grabbed the child by the neck… and proceeded to pull the baby out and she just came out with a tsunami behind her. It was incredible. I’ve been trying to come up with words all day as to explain the feeling, but it’s absolutely amazing”.

Todd’s second grandchild, Evelynn Engstorm, was born 3 weeks prematurely but is healthy and recovering in an incubator at the Hospital.

He has experienced the birth process a number of times, having five children of his own, but none of them will be as memorable as the birth of his second grandchild.

“I’ve been a coach a few times, but this was an experience – it’s a once in a life time thing for the average, common person and the feeling is absolutely amazing, it’s hard to put it in words”.

The new mom said she will never forget the experience, despite the unexpected turn of events.

“It was nice to actually have it happen so fast,” she said. “Once she was out, it was definitely worth it.”