Is it safe to make your own baby formula?  This is something that has been debated in the parenting space for decades.  Kristin Cavallari came under fire when she released her recipe for homemade formula, which included goat’s milk powder, organic maple syrup, olive oil, cod-liver oil, and molasses in 2016.  At the time she said that “goat’s milk is the closest thing out there to human breast milk,”  causing a lot of backlash from the medical community that noted a diet of goat’s milk lacks vitamin D, B12, and iron, all nutrients that are essential to a baby’s growth and development. 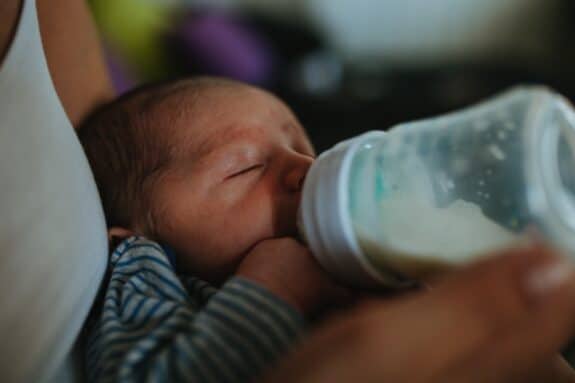 Infant formula is often the sole source of nutrition for infants and is strictly regulated by the FDA.

“The agency has requirements for certain nutrients in infant formulas, and if the formula does not contain these nutrients at or above the minimum level or within the specified range, the infant formula is adulterated. Homemade infant formula recipes have not been evaluated by the FDA and may lack nutrients vital to an infant’s growth.”

“The FDA generally regulates commercially available infant formulas, which are marketed in liquid and powder forms, but typically does not regulate recipes for homemade formulas. The FDA does not recommend that parents and caregivers make infant formulas at home because of serious health and safety concerns. The potential problems with homemade formulas include contamination and the absence of or inadequate amounts of critical nutrients. These problems are very serious, and the consequences range from severe nutritional imbalances to foodborne illnesses, both of which can be life-threatening. Because of these severe health concerns, the FDA strongly advises parents and caregivers not to make and feed their infants homemade infant formulas.”

The World Health Organization recommends exclusive breastfeeding (i.e. no other fluids or solids) for six months and then continued breastfeeding combined with solid foods for 2 years or as long as mother and baby desire. If parents are unable to provide breastmilk for their babies there are many infant formulas on the market that are designed specifically with your baby’s growth and stage of development.