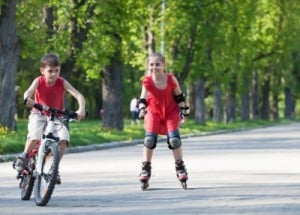 Being fit can help kids be healthier adults. Being fit can also help ward off serious health conditions like obesity, diabetes and heart problems. But according to researchers from Michigan State University, fit kids can expect even more than just good health; they can expect to excel academically as well.

Published in the Journal of Sports Medicine and Physical Fitness, Michigan State University’s study is the first to link overall fitness (body fat, muscular strength, flexibility and endurance) to both improved scores on objective standardized tests and classroom grades, which rely on subjective decisions by teachers.

“Kids aren’t really fit if they’re doing well in just one of those categories,” lead researcher Dawn Coe, now an assistant professor at the University of Tennessee, Knoxville told Medical News Today. “We looked at the full range of what’s called health-related fitness.”

With the help of her colleagues, Coe, who had been a doctoral student in MSU’s kinesiology department at the time of the study, gathered data from 312 sixth to eighth grade students at a West Michigan school. Fitness levels of the children were determined through an established program that included exercises like push-ups, shuttle runs and more. Results from the fitness tests were then compared to the students’ letter grades throughout the year in four core classes and standardized test performances.

After looking at the data, researchers found that the fittest children scored highest on their standardized tests. They also had better grades in their four core classes. This was true, regardless of gender or whether or not they had gone through puberty yet.

Co-author James Pivarnik says that the findings suggest that schools that cut physical education and recess may actually be harming the grades of their students. This, in turn, affects the school’s funding and prestige.

“Look, your fitter kids are the ones who will do better on tests, so that would argue against cutting physical activity from the school day. That’s the exciting thing, is if we can get people to listen and have some impact on public policy,” Pivarnik told Medical News Today, adding that, “Fit kids are more likely to be fit adults. And now we see that fitness is tied to academic achievement. So hopefully, the fitness and success will both continue together.”