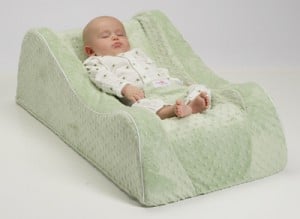 The CPSC announced on Wednesday that they would file a complaint against Baby Matters LLC, stating that their products; the Nap Nanny® and Nap Nanny Chill™ infant recliners, have been responsible for 5 infant deaths.

The complaint notes that the Nap Nanny Generation One and Two, and Chill model infant recliners contain defects in the design, warnings and instructions, which pose a substantial risk of injury and death to infants. The Commission voted 3-0 to approve the filing of the complaint, which seeks an order requiring that the firm notify the public of the defect and offer consumers a full refund.

In 2010, an infant death prompted the recall of more than 30,000 of the original Nap Nannies.  At that time a 4-month-old girl from Royal Oak, Mich. died in a Nap Nanny® that was being used in a crib. According to the CPSC, the infant was in her harness and found hanging over the side of the product, caught between the Nap Nanny® and the crib bumper.

Likewise, if the Nap Nanny® is placed on a table, countertop, or other elevated surface and a child falls over the side, it poses a risk of serious head injury. Consumers should always use the Nap Nanny® on the floor away from any other products.

Shortly after the company re-launched the sleeper with a snugger fit for infants and labels that warned against using the wrongful use of the product.

Unfortunately parents were not reading the directions and were still using the product incorrectly.

To date, CPSC has received a total of over 70 additional incident reports of children nearly falling out of the product. Their staff alleges that the products create a substantial risk of injury to the public.

On their site,  Nap Nanny posted the following note:

Early this year, after learning of three additional incidents in the Gen2, one predating the recall and two since the recall, Nap Nanny began several months of discussions with the CPSC, crafting a plan to remind consumers of how to properly use the product. The CPSC wanted consumers to stop using the discontinued Gen1 and Gen2 Nap Nannys.

In July of this year we learned that an infant died in a crib in which a Nap Nanny Chill was present. Unfortunately, the baby was placed in the Nap Nanny without a cover and without being secured by the harness. The infant was found in the crib, outside the Nap Nanny, near loose blankets. The cause of death was Sudden Unexplained Infant Death with accidental asphyxia not excluded.

Upon learning the news of this incident, the CPSC reversed course and informed us that it deemed the Nap Nanny Chill unsafe because of what the Commission described as

“reasonably foreseeable use.” In addition, the CPSC now says the warning labels are “inadequate.” These are the same warning labels the CPSC helped us write and approved two years ago. They are also claiming the harness is “defective” in that it’s difficult to adjust the waist straps, making it less likely parents will use the harness. The changes to the harness on the Nap Nanny Chill were made at the urging of the CPSC two years ago.

Last month Nap Nanny announced that they would closing their doors blaming, in part, the legal costs stemming from protracted negotiations with the CPSC.

Selling for $129.99, the Nap Nanny was a popular product with parents, who deemed it a ‘miracle’ worker for little ones, who didn’t sleep properly.

Just like with the Bumbo seat, parents need to start to take responsibility for using products incorrectly. Over and over again it was stated that this was a floor only product so why were babies still being placed in it in their cribs with BUMPERS? IF your crib has bumper pads in it you need to remove them now. Yes, they look nice, but they are also not safe. In fact Health Canada issued a warning about them in 2005 and a couple states have also put forth legislation to ban these in recent years.

In the last 3 years more than 160,000 Nap Nannys were sold, which means they will be in circulation for many years to come.  Even though the company has ceased operation, their instructional video is still live at youtube.  It outlines proper use and improper use of the positioner.  If you have one please take the time to watch the video to ensure that your baby will always be safe when sleeping in the Nap Nanny.