One in thirteen children has allergies. For some, the reaction is slight. For others, the reaction can be deadly. What a lot of parents don’t know is that continued exposure to an allergen, unless recommended and monitored by a physician, can increase the risk of a dangerous reaction. 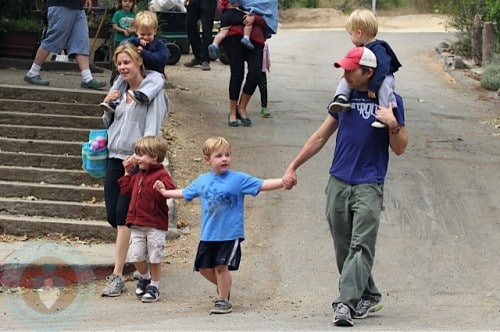 Actress Julie Bowen of “Modern Family” has a son with allergies. She recently spoke to the LA Times about a scare her family had when her son suffered a life-threatening reaction.

“When my oldest son was just shy of two years old, he was eating peanut butter and he was stung by a bee simultaneously,” Julie told LA Times. “We’re not exactly sure what the trigger was, but he went into anaphylactic shock. His entire face swelled up, his eye swelled shut and his lips became giant. My husband sent me a picture of it, and I immediately panicked.”

Thankfully, Julie and her husband were able to get their son medical help quickly enough that he was able to make a full recovery.

“We took him to the ER, where he was treated  with epinephrine, and ever since then, we’ve been vigilant about keeping him safe,” she said.

That reaction changed her life. Julie is now an activist, teaching parents and the general public about allergies in children.

“It was so scary. At first I actually thought it couldn’t be an allergic reaction; there was some small amount of denial kicking in. He had eaten peanut butter before, and I just didn’t want it to be true. I thought, ‘No, no it must be something else,’” Julie said. “I don’t want other families to go through that. I think that if I recognized how serious this was, I would have learned more about it and the denial wouldn’t have kicked in at all. For that reason, I want other parents to know what to look for. Our son’s reaction to his allergy was very dramatic, but I’ve been over at a friend’s house and she was having nuts and her child had a slight reaction that my friend ignored…There’s this wave of kids who have food allergies. It’s a big deal; it’s a reality.”

In fact, it’s such a big deal that Julie has changed certain aspects of how she parents her children. All of her children know what an auto-injector is and how it is used. And she introduces new foods safely and slowly.

“So far my other kids haven’t had any allergic reactions, and they’ve all been introduced to the same foods,” Julie said. “We’re careful when we introduce a new food – especially something like shellfish, which a lot of people are allergic to – so when we introduced shrimp to all the kids, we didn’t do it when we were on a tropical island far away from medical care.”

But knowing how to introduce foods is only the beginning. All parents should know how to recognize an allergic reaction and what to do if it should happen, Julie says.

“Parents need to get familiar with the signs and symptoms of anaphylaxis, to be vigilant and aware and know the triggers,” she said.

Parents shouldn’t be the only ones on the ready though. Julie has taken the time to educate her son about his allergies and has taught him how to keep himself safe. So, rather than her trying to protect him all of the time, she has made him a “part of the solution.”

“With my son, any time there’s a new food that he’s not familiar with, he’ll ask if there are nuts in it,” she said. “Kids are surprisingly able to understand the issue and be part of the solution. He’s young, but he’s very aware of it and doesn’t think it makes him weird or strange, because it doesn’t.”