Iris Halmshaw looks a lot like any other five-year-old girl. But this girl, nonverbal because of her autism, creates paintings that are being compared to masterpieces created by some of the greatest artists of all time. Those very same paintings are being sold for thousands of dollars. 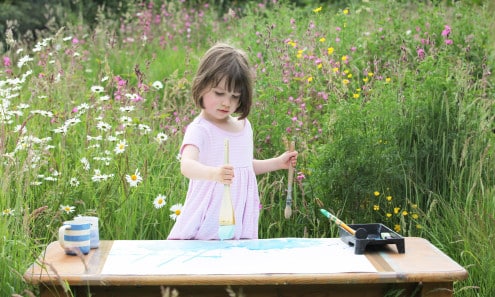 It all started when, at the age of two, Iris still wasn’t communicating or picking up words, and she rarely made eye contact with her parents, Arabella Carter-Johnson and Peter-Jon Halmshaw. They knew that something was wrong so they started researching the possibilities.

“We researched it ourselves,” Arabella told CNN. “But as parents, you are always hoping that there was some other explanation.”

But there wasn’t one, and Iris was eventually diagnosed as a child with autism. For her mother, the news from the doctor sounded “depressing” because she was told that few therapies actually worked. But she and her husband were unwilling to accept that they’d never be able to communicate with their daughter. They went back to researching, spending long nights trying to find something that would help.

In the end, they opted for art therapy.

Iris picked up painting techniques surprisingly fast, Arabella said, and before long, she was spending a great deal of time working on her canvases. And, unlike most children at such a young age, she could spend around two hours in one art session. But even better was the fact that art had, in fact, become a way for Iris to share the way she saw the world with her loving parents.

“From the first painting, she filled the paper with color and it wasn’t random – it was considered and thought out,” Arabella told CNN. “She was so excited and happy I knew that we had found a key into her world and a way of interacting with her.”

That form of communication turned into a way to better care for Iris, both now and in the future, when her mother, a photographer, started sharing the paintings on her Facebook profile. The response was overwhelming, and within the next two years, the paintings are in such high demand that her mother has set up a website where originals and prints of Iris’s art can be purchased. The site attracts more than a million page views from more than 200 countries, and some of her paintings have been sold for thousands of dollars. 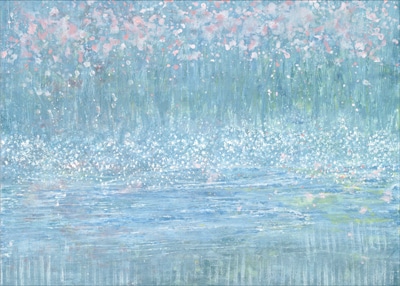 “All profits from the originals go into Iris’s savings accounts,” Arabella said. “We also sell cards and prints, and the profits from those go towards her speech therapy, occupational therapy, music, and yoga.”

All of those little extras have made a massive impact on Iris’s overall quality of life, her mother says, even if she doesn’t fully understand all the noise being stirred by her art.

“She has a tendency to drift off into her own little world, if you let her,” Arabella said. “So by using her interests, we manage to engage her, and she changes into a giggly little girl dancing around the house. Her speech isn’t at a stage yet where we can have conversations, so it’s hard to tell exactly how much she is understanding everything that is happening surrounding her art.”

But for now, that’s okay. In fact, her parents have gone to great lengths to not overwhelm their tiny little artist. 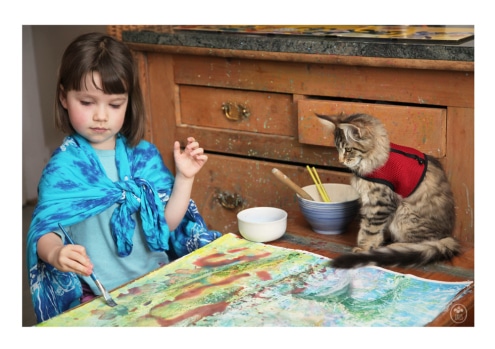 “We have shielded her from a lot of it,” her mother said. “She hasn’t been to TV studios or done interviews.”

Yet it doesn’t deter from the amazing art that quite often depicts particular moods or experiences that are named Patience, Separation, and Immersion—all of which are united by a distinctively contemplative, lightly melancholy atmosphere, mysterious sense of depth. Work that is so profound that this little girl is now being widely accepted as a savant.

Professor Allan Snyder from the Centre for the Mind at the Australian National University says that Iris—as well as many other individuals with autism—are able to unlock a hidden well of potential that rests inside of all of us, but that we rarely access.

“I think it’s possible for a perfectly normal person to have access to these abilities,’ he said. “[But] savants can’t usually tell us how they do what they do. It just comes to them.”