Holding their little boy, Maxamillian, Caroline and Lars Welz look like every other proud parent in the world. But what most people don’t know is that what they are holding is a medical miracle – the first ever baby born with the aid of an ovarian transplant. 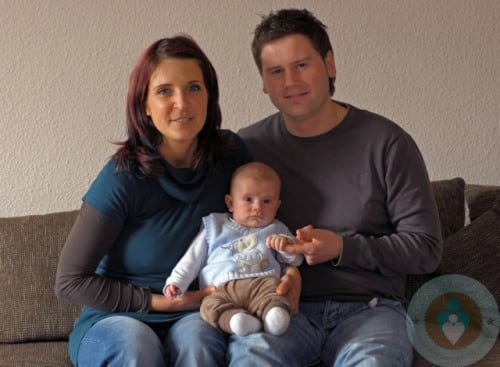 Caroline was 33 when she was diagnosed with Hodgkin’s lymphoma, a lymphatic cancer that is generally rather aggressive. She would need aggressive treatments to help save her life. Chemotherapy can often cause infertility in women, but doctors offered Caroline an alternative to infertility – an ovarian transplant.

Her ovarian tissue and eggs would be removed, frozen and store. Her eggs and tissue would later be transplanted, once her cancer was cured. At first, Caroline wasn’t really concerned about having children. But her family persuaded her.

“For me, [it was] mainly just important to be healthy again,” stated Caroline.

The next five years were filled with chemotherapy treatments, a stem cell transplant and healing. Five years after the removal of her eggs and ovarian tissue, doctors said she was ready to undergo the transplanting process.

Doctors had to transplant the ovarian tissue near her old ovary.

“It was important that the retransplantat was within reach of the fallopian tube so the unfertilized oocytes could take,” stated Distler.

Caroline also received fertility hormones to help the ovarian tissue grow and function. Before long, she became pregnant. Caroline’s transplant was a success and she was able to conceive her own child, with her own eggs and her own body.

In October of 2011, her son, Maximillian was born by caesarean. And while she was definitely hesitant about agreeing to the procedure, as she holds her son, she is glad she allowed herself to be convinced to go ahead with the transplanting process.

The pioneering technology has been used to conceive about 15 babies worldwide, according to Wolfgang Distler, the director of the Clinic Gynecology and Obstetrics at the University of Hospital Dredson. But he says that more doctors should offer this type of treatment to women that must undergo cancer treatments. He and his colleagues are working to build awareness about the procedure.

“Oncologists should offer women with cancer who are facing chemotherapy or radiation [this] option,” he stated. He also stated that he is hoping to work towards getting the procedure covered by medical insurance.

Experts do say, however, that transfer of the cancer to the ovarian tissue cannot be ruled out. If this happens, then the cancer cells can be reintroduced back, into the body, which can start to spread throughout the body. With Hodgkin’s lymphoma, however, the chances of this happening are unlikely, according to Distler.

“In previous global cases, no recurrence [has been] described,” Distler stated. Still, samples of ovarian tissues are examined in a laboratory for tumor cells to help minimize the risk of re-introducing cancer back into the body.