Every now and again, right in the middle of an ordinary day, a miracle happens. That’s certainly what occurred in India last week when a passerby saved the life of a newborn as he was enjoying his early morning walk.

48 year-old Satyajit Chakraborty was enjoying a morning walk through Sukanta Setu, Jadavpur last Tuesday morning when he spotted a pale-colored yellow packet underneath a lamp post that seemed to have a crow that was hanging around pretty excited. At first glance, he believed it to be a piece of litter that someone had carelessly discarded. But then, he heard the tiny sounds of what sounded like an infant’s cry.

That sound made the construction material supplier stop and backtrack towards the direction of the lamp post where the packet laid. After shooing the crow away, he was shocked to find an infant, covered in blood and mood. Initially, the man was panicked but realized that time was of the essence.  Chakraborty recalls,

“I was carrying enough money to admit the baby to a good hospital but I needed some assistance. So I called two women who I know stay in a nearby slum and another acquaintance of mine.”

After alerting the two women of the grave situation, they advised Chakraborty to move the child to a state-run hospital that was in the area, because they were afraid that the police might otherwise harass them. But he wasn’t so certain, saying,

“I wasn’t sure whether a government hospital would have the facilities to save the baby. He seemed to be in a critical condition.”

Chakraborty ultimately made the decision to bring the child to AMRI Women & Children’s Hospital in Mukundapur, where consulting neonatologist Srabani Samanta had assessed the child’s condition, saying,

“The baby was cold when they brought him here. Lack of oxygen supply to the brain was the immediate threat.”

The staff at the hospital estimated that the baby boy weighed approximately 2kg, and that he was born premature at thirty-two weeks. 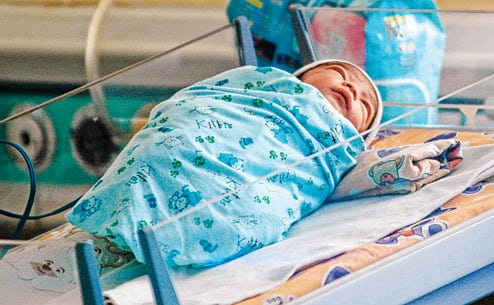 What’s worse is that the baby had likely been lying unattended for several hours out in the elements, which triggered hypothermia. When the newborn was brought in, his body temperature was only 89.6 degrees Fahrenheit, and his blood sugar was lower than normal.

By the next day, the baby was doing much better after a warm night in the controlled-temperature neo-natal warmer and oxygen support. A doctor on staff at the hospital said “He is on antibiotics to prevent infections and is able to have oral nutrition after a day of intravenous feed.” Chakraborty, who worried that the child wouldn’t live through the night, decided to visit the hospital the next day to find out about his condition, saying,

“I did my duty as a citizen. It didn’t matter to me whose baby was lying on that footpath. Saving a life was the priority.”

The good Samaritan had offered to pay for the child’s treatment, but AMRI Mukundapur did not charge anything to admit the infant.

Officials from the women, child development and social welfare department say that the police will approach a magistrate to look into sending the child to a government-run home when he is released from the hospital. He may be put up for adoption later on.

“The baby’s condition is now stable. Once he recovers completely, we will hand him over to the police.”