Having to leave your child behind at the hospital is a heartbreaking but sometimes necessary experience. Such was the case for Mary Beth Brulotte, whose son, Logan, was born 3 ½ months early. She felt guilty, and constantly imagined him crying in a cot, all alone, but her husband worked nights and she had an 8-year-old daughter to care for as well. 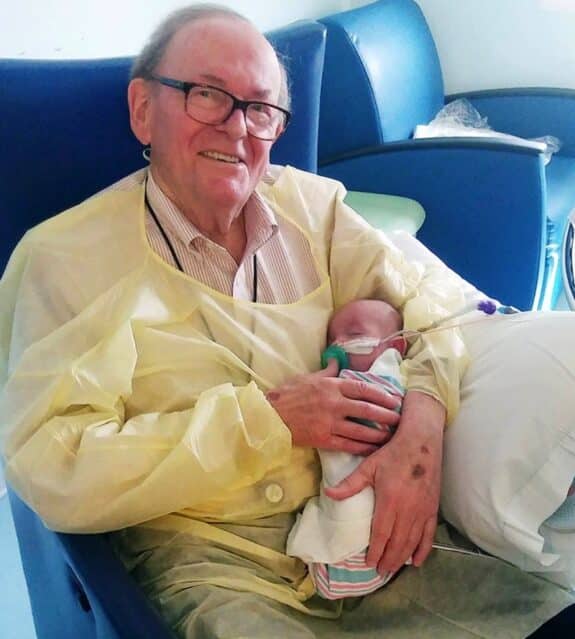 “Every mom pictures their baby in the crib all alone crying,” Brulotte told TODAY, noting that her home is two hours from the Children’s Healthcare of Atlanta, where her son is currently a patient.

But Brulotte was soon able to release those feelings and, instead, trade them in for something better: gratitude. She met David Deutchman, an 82-year-old man who has been volunteering to hold babies at the Children’s Healthcare of Atlanta’s ICU for over 12 years now.

“I was heading in and was filled with anxiety. It was just wiped away when I saw him there holding Logan fast asleep,” she said. “He introduced himself as the ‘ICU grandpa’ and I thought, ‘Oh my God, this can’t be real. This man is like an angel.’ He said he heard Logan crying and asked the nurse if he could hold him and sing him to sleep.”

Deutchman, a bit of a legend and certainly considered a saint by any parent that has ever received support or assistance from him, used to be an international business marketer. He retired and started doing guest lectures at nearby universities, but he felt he still had too much free time on his hands. So, when he found himself sitting in a rehab facility near the Children’s Hospital, volunteering seemed like the most logical path.

“I like the fact that there’s some serious stuff going on and I have an opportunity to make a contribution and help out,” Deutchman, who has two grown daughters in their 50s and two grandchildren who are 19 and 21 years old, told TODAY. “You don’t know each day what you’re going to find and what you’re going to be confronted with … It’s an atmosphere where there’s a lot of friendliness and warmth and appreciation. It’s great. I really enjoy it.”

What he enjoys most, apparently, is all the snuggles.

He typically volunteers two days a week, from 8 a.m. to 1 p.m., but he only holds a couple of babies each shift. He says he wants to make sure they each get a decent amount of snuggle time. Plus, he admits it’s really hard to put them back in their cribs.

But he’s not just there for the babies. He’s also there for the parents – and, in some cases, he is the one person that notices the struggles that they, themselves, are dealing with.

“In the hospital, the kid is getting a lot of the attention from the doctors and the nurses,” he said. “I found quickly that my niche could be taking care of moms. I go into the room and ask how they are doing, if they’ve had breakfast, and if they haven’t, to go. I tell them, ‘I won’t leave the room until you come back.’” He added that, when he asks how the parents are doing, they often tell him about their child. “I repeat, ‘No. How are you doing? Sometimes they break down. Some are up all night in stressful conditions.”

It is this support and compassion that makes him such a local legend. Parents like Brulotte, and the countless others that have come through the PICU and ICU say they’re not sure if they would have made it through some of their roughest months without him there. The fact that he’s a complete stranger, simply donating his time to help those in need, makes it that much more touching.

“I don’t feel so alone in this journey. I’ve felt like at all times, someone is there with my baby, regardless of whether I’m here or not. He’s got someone looking out for him,” said Brulotte. “That’s what really touched me. (Deutchman) doesn’t even know me, doesn’t know my family and he didn’t care. He heard Logan crying and rushed right in and soothed him. It’s those type of people that don’t search for the recognition that deserve it. I think he’s just incredible.”