Gwen Stefani enjoyed a sunny day out with her boys at the Huntington Flower Park yesterday. 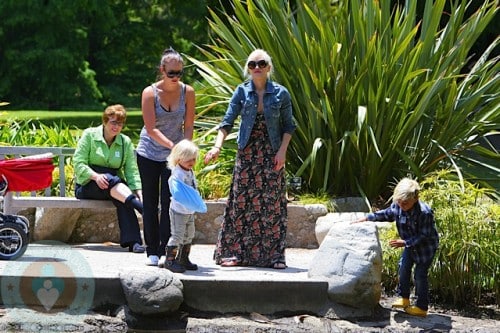 Poor Zuma has broken his arm. Dad Gavin Rossdale told People.com that the toddler accidentally took a tumble from a countertop in their home and needed to be rushed to the hospital.

“It was one of the worst nights of our lives,” the Bush frontman, 45, told the magazine last night before performing at Palazzo Las Vegas‘s Summer Soiree party.

“It was one of those freak events — he fell. A freak accident.”

After rushing him to the hospital, Zuma is doing well, Rossdale shares, but admits the event was “horrific.”

“He’s fine now,” says the rocker, who will appear as a villain on Burn Notice later this summer. “It’s almost worse for us [as parents] … The kids are never alone and you turn your back — it takes a split second.”

It seems the little guy isn’t too fazed by the event. Just hours after his tumble he looked ready to climb with his brother.

Zuma rides in a Bumbleride Queen B stroller.