Home » Has Mobile Media Really Changed the Way We Parent? 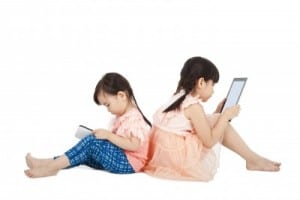 Mobile media devices have only been around for a short time, but some experts are already concerned about how they’re changing the world of parenting. Are the concerns truly valid, or are experts jumping the gun a bit? A recent study, conducted for the Northwestern University’s Center on Media and Human Development of GfK, suggests the latter.

More than 2,000 parents of children eight years or younger participated in the nationally representative survey. They answered questions regarding income, media usage, mobile device ownership, parenting practices and more. They were also asked about their primary parental concerns and where they were most likely to look for advice when it came to handling parenting situations. The answers may surprise you.

While many parents admitted that they do provide their children with mobile media devices, such as iPads, Kindle Fires and smartphones, study authors found that parents aren’t relying on these devices as heavily as some experts may believe. In fact, only 37% of all parents surveyed said they were likely to give their child a mobile device to keep them occupied when needing some time to tend to household duties, such as cleaning or cooking, and only 17% of parents said they’d offer a mobile device to calm an upset child.

As it turns out, it seems that parents are still relying mostly on time-tested items to entertain their children. When needing some time to tend to daily responsibilities, parents say they are most likely to offer their child a toys and activities (88%), books (79%) or TV time (78%). And when it comes to pacifying a cranky kid, more than half of the parents said they’d offer a toy or activity to their child (65%). Another 58% said they’d offer a book and 40% said they’d use TV to calm their child.

When it comes to educational tools, only 10% of all parents surveyed were likely to hand over a tablet or smartphone. And while parents earning $100,000 a year or more a year were less likely to use television for educational purposes (31%) than their lower income counterparts (54%), only 12% of parents, overall, look towards television for an educational activity. In fact, most of them were likely to point their child towards a book (62%) or a toy or activity (41%).

There is one area where mobile devices can be prominently seen in parenting tactics: rewards and consequences. While toys and activities (84%), books (69%) and television (69%) are still the most common rewards for children who have behaved well, mobile devices are offered as rewards 44% of the time. Mobile devices are also used frequently as a consequence for negative behavior (59% of parents said they revoked usage as a consequence), but television restriction is still the most commonly revoked activity among parents (71%).

What was most interesting about this study, in my opinion, was that study authors found that parents – not their children – are the driving force behind how much media children partake in. Parents who were considered “media-centric” (those that engaged in an average of 11 hours per day using some form of media) had children that were more media-centric. These parents were most likely to allow their children to have television in their rooms (44%), and one in four of these parents said that they use media devices to connect with their children. In contrast, media-light families (those that use less than two hours a day of media) were much less likely to put a TV in their child’s bedroom (26%) and they were much less likely to spend time connecting through media. For example, 53% of media-centric parents said they enjoyed watching movies or TV together as a family while only 32% of media-light families found television to be an enjoyable family activity.

So, as it turns out, television is still the primary media influencer within families, and parents aren’t really using their mobile media devices as often as experts seem to think. Admittedly, my children love their tablet time, and my youngest ones definitely enjoy playing on my phone, but, as the study indicates, they spend more time watching their favorite television shows on any given day than they do consuming any other form of media.

That’s not to say that I don’t believe that mobile media isn’t a valuable and engaging tool, because we definitely enjoy playing and reading on the tablet together – it’s just not something we do daily or for extended periods of time. And it’s most definitely not how we handle temper tantrums or boredom. But that’s a story for another post.

What about you? Do you feel that mobile media devices have changed how you parent? If so, how?