Helena Bonham Carter was photographed out shopping at Tesco with her daughter Nell in London today. 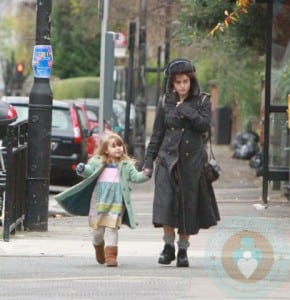 The actress, who is best known for her dark characters, will next be on the big screen this Spring in another Tim Burton production ~ Dark Shadows.  Based on the cult TV series, the gothic-horror tale centers on the life of vampire Barnabas Collins and his run-ins with various monsters, witches, werewolves and ghosts.

She recently told MTV.com that the movie would be ‘impossible to sell’.

“It’s very original and it’s kind of uncategorizable. It’s going to be impossible to sell, frankly, because … it’s a soap opera, but it’s very, very subtle. I don’t know. We’ll see. It’s a ghost story, but then it’s an unhappy vampire story”

The movie is due to be released in May, 2012 so we will see then if Tim Burton is able to straighten out the story for movie goers.