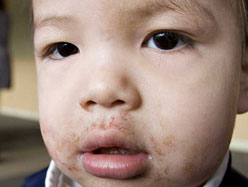 In what seems like a scene lifted from the movies, a 21-month old baby boy was saved by his quick thinking parents from blazing smoke and fire, when they dropped him from their third floor balcony into the arms of a stranger.

Vanessa Machiskinic and her boyfriend Adrian Key were in their Edmonton apartment yesterday when they heard commotion in the hallway. Upon opening the door, they were hit by a wall of thick smoke.

The panic stricken pair, who thought they wouldn’t be able to go through the stairway, smashed their balcony door. As they looked down, they saw a neighbor they didn’t know looking up and telling them to get out of the building. It was then that Vanessa decided to drop Jet, their baby boy into his arms.

While Vanessa who is five months pregnant with twins says “It wasn’t a very tough decision, I just knew what we had to do. I thought we were going to die,” Adrian was shocked and hesitated for a second before dropping the child.

Fire investigators believe the fire broke out from a second floor suite room from a space heater. As the building smoke detector was without batteries it went undetected until smoke billowed out in all directions.

Vanessa and all other 18 residents of the building finally made a run for the smoke-filled, dark stairs and were safely out. The fire fighters were also successful in saving several feline pets of the residents. – Atula, staff writer