With just three weeks of parenthood under her belt, Hilary Duff is already admitting she’s learned a lot.  In an interview with Parade Magazine the new mom says ‘she remains in awe of the insights brought on by having a child.’ 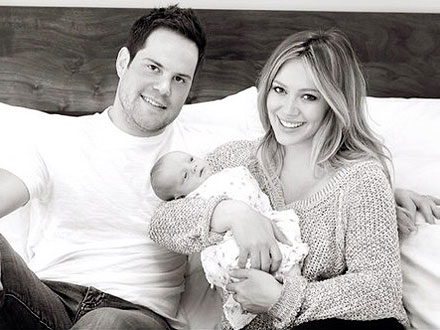 The actress and husband Mike Comrie became parents to baby Luca on March 22nd. Since that time Hilary has been spotted at the studio trying to get back in shape.  She has, however, become a type-a mom and is learning that not everyone does things her way.

“Despite my best intentions, I have to learn to let go of the way I do things. My mom has been taking Luca while I do pilates for an hour and I had to stop giving her directions about how I changed Luca’s diaper. Even with Mike, he’s not going to do everything the way I would do it — and vice versa — but we just want the best for Luca. It’s helped me appreciate Mike’s role in his life and that we’re doing things with the most love that we can. He’s really hands on and I appreciate any little help I can get.”

During her interview Hilary also talks about Luca’s name, other people’s comments on her post-pregnancy and whether number 2 is in the plans.  Here are the highlights:

On the most surprising thing about motherhood.

“The list goes on and on. I felt my heart grew the second I met him. You feel so protective right away. You feel loving and nurturing right away. Everybody always talks about it, about how you don’t know love until you meet your baby, and you really feel that. There are no words. It was a really wonderful surprise. And there is no way to prepare yourself for the sleep deprivation and what comes with it.”

On pressure to get back into shape.

“I don’t have a project waiting on me that I have to bust my butt to get into shape for so it’s more about how I feel. I like working out since it makes me feel more clear-headed and positive. I did pilates and yoga during my pregnancy but I really missed getting my butt kicked. But then I read comments on my Twitter page about how I’m waddling into pilates and I go, ‘wow, that’s a really mean thing to say. I just had a baby three weeks ago!’ There is a little bit of pressure but most of it comes from me.”


“To be totally honest, I had a really easy pregnancy and I did enjoy a lot of it. But a part of me isn’t like those women who love being pregnant. I love my baby and I miss that feeling of being attached to him when he’s kicking, but I was so ready to not be pregnant. Right now, I’m focused on being the best mom I can be and when I start working again, I’ll see how I juggle everything. But then again, my sister [Haylie Duff] and I are very close so I want Luca to have someone close [to his age] — but not too close!

On how Luca got his name.

“We don’t have any rhyme or reason about why we chose that name. We had the names Cruz and Luca on our list with some others and decided at the very last minute what it was going to be. There is no good story behind it, which is kind of sad. We just liked the way it sounded together. We were thinking of Cruz as a first name and were just mixing and matching it with things on our list and came up with it. We liked the name Luke too but we wanted to do something different — but not crazy. Afterwards we found out his name means ‘bringer of light.’ I love that.”

It was also announced that Hilary will be helping Johnson & Johnsons kick-off their campaign supporting Save the Children.