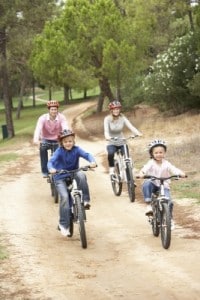 Today, more than a quarter of all toddlers in the U.S. are considered obese. Combatting this epidemic starts with a healthy diet and more exercise. But researchers from Duke Medicine are saying there’s something more they can do to improve the health of their children: parents can adopt healthy lifestyles themselves!

Published in the online International Journal of Obesity, Duke’s recent study looked at the relationship between mother and child. It is the first to truly use the home environment to see how they related to dietary and exercise behaviors among toddlers.

“Obesity is a complex phenomenon, which is influenced by individual biological factors and behaviors,” study author Truls Ostbye, M.D., PhD, professor of community and family medicine at Duke. “But there are variations in obesity from one society to another and from one environment to another, so there is clearly something in the environment that strongly influences the obesity epidemic.”

Ostbye and his colleagues studied data on 190 mother and child pairs. All of the mothers were considered overweight or obese, and all of the children were between the ages of 2 and 5. Information was collected on the children’s food intake and exercise levels over the course of a week. Children were also given accelerometers to wear to measure sedentary time and moderate to vigorous activity time.

Mothers were asked to report information on the environment of their children, including policies about food and physical activity, availability of physical activity equipment, and accessibility of healthy food and junk foods. They were also asked about their own eating habits and exercise levels.

After analyzing the data, researchers found a significant association between the environmental measures and both physical activity and healthy food consumption. And even though activity levels were less impacted than the food choices, researchers concluded that the best way a parent can encourage a healthy lifestyle in their children is to model it with their own behaviors and to maintain a healthy home environment. For example, placing policies regarding junk food consumption and family meals together; mothers who did this in the study had children more likely to make good food choices.

“The ‘obesiogenic’ environment is broad and multi-faceted, including the physical neighborhood environment, media and advertising, and food tax policies, but we feel that home environment is critical, particularly among children,” Ostbye said. “However, we didn’t’ have a lot of evidence as to how important this was.”

And now, that evidence exists. However, there is still more research to be done, the authors said. For example, the study looked at socioeconomic factors, such as mother’s employment status and education levels. Though these factors didn’t seem to have any noticeable effects on the physical activity of the children, researchers came up with mixed results when it came to food choices. If more is learned about this important factor, it may be possible for researchers to come up with different strategies to lessen the impact of lack of education or long hours spent at work, among other things.

But for now, the overall message is that parents need to remember that their children are watching, and what they see is often mimicked on into adulthood. Marissa Stroo, a co-investigator on the study says that this may be a hard message to face, but it’s a very important one that we should all take to heart.

“It’s hard for parents to change their behaviors, but not only is this important for you and your own health; it is also important for your children because you are a role model for them,” Stucco told DukeHealth.org. “This might be common sense, but now we have some evidence to support this.”