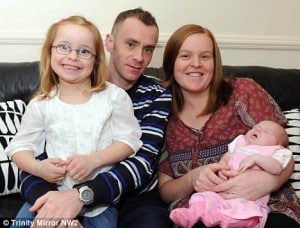 Jodie Kenna though she was just having painful cramps when she went home from work and decided to run a bath for herself. The cramps, however, turned out to be labor pains. Before she could call for help, Kenna gave birth alone in her bathtub.

Minutes after getting into a bath to relax and ease cramps, Jodie Kenna found herself giving birth to a healthy baby girl. The 7lb 5oz baby, named Elizabeth, was a shock for Kenna, who did not even know she was pregnant.

Kenna immediately called her partner, Alan Whitehead, to let him know he was a father for a second time. Whitehead quickly came home to find Kenna holding a newborn baby girl. Despite the unexpected surprise, the couple is thrilled to have a second daughter in their home.

Miss Kenna, who also has a five-year-old daughter, Evie, said: ‘We are so happy with her. She is doing really well. And Evie is loving having a little sister.

‘But when it was happening I was terrified. I had no idea I was pregnant.

‘It sounds mad but the midwives say it does happen. Alan was in shock when he came home to find me with a baby in my arms. But he has got over it now and is really pleased.’

The couple also called Kenna’s mother, who rushed over to see the surprise granddaughter.

When I found out, I assumed she would be a tiny little thing. But she was a nice healthy weight. It really is amazing.’

Mother and baby are both healthy and doing well. The family is excited about their new daughter Elizabeth making a surprise entrance into the world. – Summer, staff writer