Jessica Simpson showed off her growing baby belly as she carried her daughter Maxwell into a lunch date with her fiance Eric Johnson at King’s Fish House in Calabasas, California.

Remember last time when she insisted on wearing heels for most of her pregnancy?  Those days are over.  The singer, who is due with her second child – a boy, kept it comfy in a belly hugging black tank, animal print maxi skirt and flip-flops. 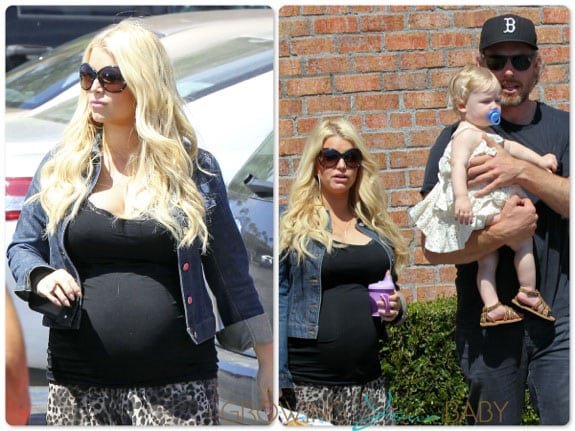 Always a cutie, Maxwell wore a crocheted dress and leather weaved sandals, while sucking on her pacifier.  The couple must have lots of backups because the tot had a pink one in her mouth on the way in and a blue one on the way out. 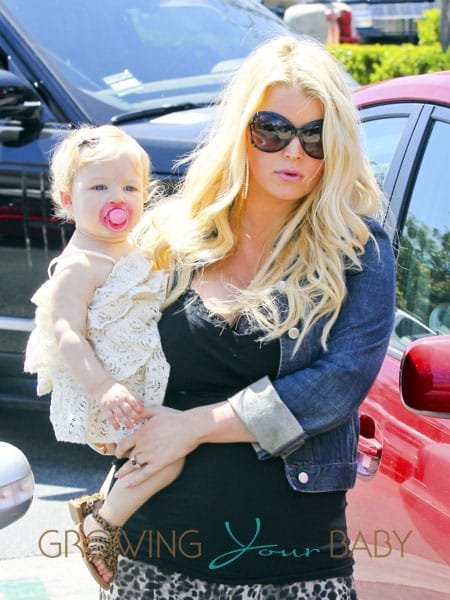 It sounds like there could be wedding bells in Eric and Jessica’s future! RadarOnline.com is reporting that after cancelling their plans to get married twice, they will tie the knot one month after their second child is born.

“Jessica and Eric are adamant they want to wed this year,” a source close to the Simpson family tells Radar.

“Before they found out Jessica was expecting her second child, they’d already set the wheels in motion for a low-key ceremony.”

“But then, they had to put their plans on ice when they discovered Jessica was pregnant. Plus, she wanted to avoid a clash with her best pal CaCee Cobb who had a wedding back in December.”

For now, Jessica is being a mom and working on her show Fashion Star. If she is going to plan a wedding for the end of the Summer, she will have a lot on her plate. Adding a baby to the family is a lot of work. Hopefully she has a lot of great people around her that will help!