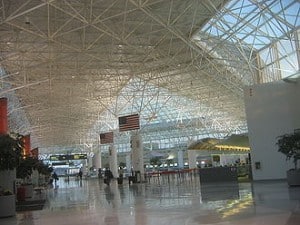 Fire & Ice manager Margette Ward was starting to get used to the slow days in her jewelry store. It had been quiet since AirTran moved out of the BWI Thurgood Marshall Airport Concourse D after its merger with Southwest. But over the weekend was a different story. Sunday, Margette Ward and one of her employees, Audrey Goldberg, helped a mom deliver her baby in a nearby restroom.

Audrey was the first to hear the news of the impending birth. A woman had approached her in the store and told her, “I think there’s a woman in the bathroom about to go into labor.”

Ward instructed Goldberg to call for help and headed off to the bathroom to check things out. She walked in to find exactly what the woman had said; a soon-to-be mother in labor. Ward, along with a Maryland Transportation Authority Police officer, helped the woman safely deliver the infant.

“The woman was on the floor, the baby was on her chest. The police officer was up to his elbows in fluid. My boss was right next to her, calming her down,” Goldberg told reporters. “It was the most incredible day. I’ve never seen a baby born. It was so emotional.”

Shortly after baby’s arrival, the BWI Fire and Rescue Department took mother and baby to the Baltimore Washington Medical Center in Glen Burnie. Kevin Cservek, spokesperson for the hospital, reported that mother and baby are doing fine, but the mother has declined all interview requests.

After all the excitement was over, everyone learned that the mother had apparently arrived on a BWI flight, although it is not clear as to who she was, where she was coming from or whether or not she is from the area.