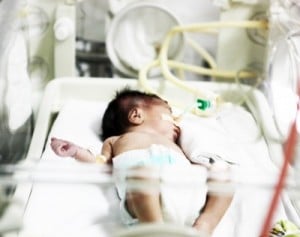 Kangaroo care is a technique practiced by parents of premature babies where the baby is held skin to skin with its mother or father.  Well known for reducing the baby’s stress level, it is also a proven technique to improve a preemie’s breathing. Now, a new study has found more benefit from the bonding session.  In the October issue of Acta Paediatrica the researchers at Universite Laval reveal that very premature infants who benefited from this method ‘had better brain functioning in adolescence – comparable to that of adolescents born at term – than did premature infants placed in incubators’.

Previously it had been found that infants born 33 weeks experienced more cognitive and behavioral problems during childhood and adolescence. Université Laval researchers Cyril Schneider and Réjean Tessier, of the Department of Rehabilitation in the Faculty of Medicine and of the School of Psychology, respectively, and their Colombian colleagues Nathalie Charpak (Kangaroo Foundation) and Juan Ruiz-Peláez (Universidad Javeriana) wanted to determine if Kangaroo Mother Care could prevent these problems. For their study they compared 48  fifteen-year-olds; 18 premature infants who were kept in incubators, 21 premature infants who had been Kangaroo’d for an average of 29 days, and 9 term infants.

To assess their brain brain functions, the researchers used transcranial magnetic stimulation, a non-invasive and painless technique that allowed the team to activate brain cells in targeted areas, most importantly the primary motor cortex that controls muscles. By measuring muscle responses to the stimulation, they were able to assess brain functions such as the level of brain excitability and inhibition, cell synchronization, neural conduction speed, and coordination between the two cerebral hemispheres.

From the data they collected it was found that all brain functions of the adolescent Kangaroo group were comparable to those of the term infant group. The premature infants, who were placed in incubators,  significantly deviated from the other two groups 15 years after their birth.

“Thanks to Kangaroo Mother Care, infants benefited from nervous system stimulation — the sound of the parent’s heart and the warmth of their body — during a critical period for the development of neural connections between the cerebral hemispheres. This promoted immediate and future brain development,” suggests neurophysiologist Cyril Schneider.

Psychology researcher Réjean Tessier notes that “infants in incubators also receive a lot of stimulation, but often the stimulation is too intense and stressful for the brain capacity of the very premature. The Kangaroo Mother Care reproduces the natural conditions of the intrauterine environment in which the infants would have developed had they not been born premature. These beneficial effects on the brain are in evidence at least until adolescence and perhaps beyond.”

When my son was in the NICU I kangaroo’d him from 28.5 weeks and I found that every one of his vitals improved when he was close to me. He was known around the hospital as the lazy baby that didn’t want to breathe but it was the complete opposite when we were doing skin to skin. In the past we have written about babies who have done incredible things after they were kangaroo’d including the story of Emily Ogg. The new mom had been told that her son had passed away but after two hours of being spoken to, touched cuddled and held by his mum he began showing signs of life. The warmth of a moms body paired with the soothing sounds of her heartbeat have been known to reduce anxiety, regulate breathing and help babies grow faster. In this case Kate’s body acted link an incubator to keep the baby warm, which stabilized his heart rate and helped him to breathe. Their story really is incredible.