Kate Hudson was absolutely beautiful in a full-length gold gown last night at the Costume Institute Gala in New York event, held at The Metropolitan Museum of Art. 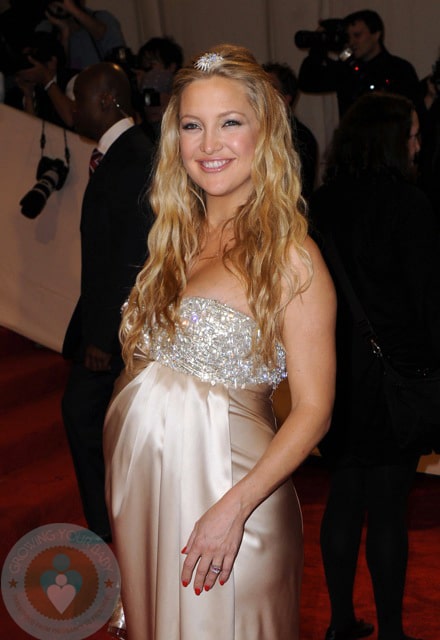 The actress stole the show in a sequined Stella McCartney gown that was accessorized by a jewelled flower in her hair and her sparkling engagement ring.

Kate recently spoke to Starpulse about how this pregnancy is different from when she was expecting Ryder saying,

It’s a totally different pregnancy completely. I mean, couldn’t be more opposite, everything. This time I’m actually set up, whereas before, I remember with Ryder I didn’t even have a nursery. I was trying to get the nursery together. I didn’t really have a house until I was seven months pregnant, a home. This time it feels like I actually got to paint a nursery. I actually have a color in a room.

Will it be blue, pink, yellow or green?

I’m going with neutral color. I don’t know what it is so it’s neutral. I like yellow. Yellow’s a good sunny color for kids I think.

Is Ryder excited about being a big brother?

He is, yes, but he’s already a brother. He’s got a sister but yeah, now he’s really enjoying it. He likes making fun of me. He’s a kid, he loves it. “You’re huge!” and all that kind of stuff. He’s very protective. I put spicy stuff on my food, he goes, “Mom, don’t eat that.” I was like, “What?” He goes, “Don’t eat that.” This was last night. He goes, “The baby might not like spicy.” I was like what is going on? All of a sudden he doesn’t want me to drive a car. You shouldn’t be driving. I can’t get up on anything high. I got up on the thing to get his ball out and he just went, get down. He’s very protective. It’s pretty cute.