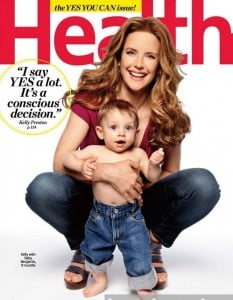 Actress Kelly Preston has appeared in more than 40 movies, with the latest being upcoming movie Gottis along with her actor husband John Travolta and daughter Elle. But unlike a film star, it is not the roles she plays in the films but her role as a mother that Kelly enjoys the most. In an interview with Health Magazine, she reveals all about her mom side – From the wonderful feeling of pregnancy to being an eco-savvy mom and a women who believes in healthy living.

The Travolta family had a difficult time two and a half years back when the lost their beloved 16 year old son Jett to a seizure. Jett was diagnosed with autism and had seizures. It was at this time that Kelly first became aware about the hazards of chemicals in children’s lives.

“I’d be on the computer at 3 a.m. researching things that can trigger seizures, like MSG, food dyes, additives, and preservatives,” she says.

That is when the actress dedicated her life to speaking about the danger of toxins and pesticides on behalf of children’s health organizations. Along with her husband she also created the Jett Travolta Foundation (jett-travolta-foundation.org) to help children with special needs and also help charities and educational causes.

“Johnny and I feel you’re at your best when you’re helping others. And it was really important to us to have something positive come out of this, and help people, whether it’s with learning difficulties, or seizures, or special needs—it’s really a wide spectrum of help.”

Kelly says she never had any doubts about being pregnant. She loves being a mom and said she would love to keep having babies. She recalls how even as an 11 year old she would wish to become a mother one day and loved being a babysitter.

“I was doing commercials for thousands of dollars, but I’d still babysit for $3 an hour just because I loved it. I’m just in a good place, and am able to really be with my kids. It’s pretty amazing having a child at this age.” 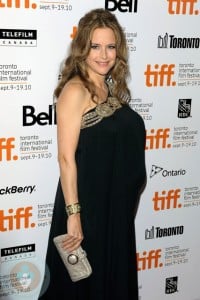 For her, pregnancy is a very special time.

“I didn’t have any doubts. I love being pregnant. I love the closeness I feel when I’m carrying them. I love feeling them move inside me. My heart breaks for people who aren’t able to have kids. But I feel like there’s really hope for anyone.”

She also describes herself as a very hands-on mom showering kisses on her children. Her actor husband also enjoys his ‘father’ role singing to the kids, songs by Tony Bennett and Barbra Streisand.

Kelly feels John has been a rock while they battled the tough times in their lives. She also feels she could not have made it through without her best friend Kirstie Alley and the Scientology center. For others in a similar situation the actress has some sound advice,

“Even though it may seem like they won’t, things always get better. And there are things that you can do—sometimes as simple as taking a walk or spending time with your girlfriends. Take vitamins. Never underestimate how important it is to have sleep and good nutrition. When you have those basic things, your outlook is a whole lot better.” 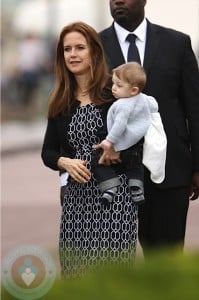 Kelly became a mother for the third time in her 40s and she firmly believes it felt so easy because of her healthy lifestyle. She says getting older doesn’t mean you have to slow down. Her diet includes organic food free of chemicals, antibiotics and hormones.

At home she is also conscious about introducing the healthy lifestyle to her kids. They prefer to eat as much of organic products and as little of canned and processed food as possible. Her home products are non-toxic.

But Kelly also stresses that they are not over obsessive. She has a fascination for desserts and loves indulging. She says, “We’re not obsessive. I say: Do what you can, enjoy yourself, and don’t live in fear.”

Speaking on the pressure celeb moms have to get back into shape post pregnancy, Kelly said feels the craze to lose weight in 6 to 8 weeks is insane but she personally didn’t feel the pressure. She had consciously decided to not to go to work right away and lost the added weight in a slow, healthy and natural way.

Nowadays she enjoys playing tennis with husband John and says it’s a fun way to stay fit. She also says that they are well matched. On being asked about her secret to a 20 year long happy married life Kelly says, “We check in with each other: What’s wanted and needed? We keep it alive and playful and fun. And we don’t push each other’s buttons.”

Finding the balance between health and happiness and passing on the secret to her children is what makes this noted actress an incredible mother and a woman.