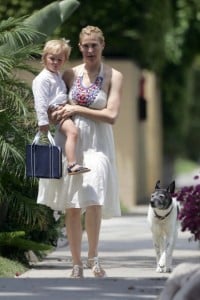 Gossip Girl’s Kelly Rutherford recently opened up to pro-breast feeding website Best For Babes about breast feeding and her experiences as a first time mother.

The new mom has been very outspoken about her views on breastfeeding. In fact she breast fed her 2 year-old son Hermes throughout her second pregnancy.

Here are a few highlights:

Best For Babes:Did you do anything to prepare or did breastfeeding come as a surprise?

Kelly: I took a class, but at the end of the day, if they are not latching on, then you feel “what’s wrong with me, what’s wrong with the baby.” Then, you have all sorts of experts talk about what’s going on. What I discovered, is that it is very important that the baby breastfeeds right away when she is born. As soon as I gave birth to my daughter, she was right on the boob, and I’ve had no problems. It was a big difference from the first birth, with my son, which was a very long one, so they thought, let me rest a little bit, but then by the time I breastfed him it had been a few hours. With my daughter, obviously the doctor made sure that everything was okay, but I didn’t do all of the procedures they recommend right away, I did the least amount that was necessary that was still healthy, so that my daughter would be able to latch right away.

BfB: How has your son reacted to your daughter and to your breastfeeding her?

Kelly: Well, he’s still nursing too, so they both just nurse.

BfB: Wow! Good for you! Has that helped with the sibling rivalry that sometimes comes with a newborn?

Kelly: I think it’s really helped the transition with the new baby that my son still gets that comfort and that cuddling. I’ve heard that babies that have been weaned when they see you nurse a newborn want to start nursing again.

BfB: Absolutely, toddlers do get jealous sometimes and tandem nursing is a wonderful transitional tool.

KR: I just want to say, to each his own. I know it’s not for everyone. Some people wonder how I do it and isn’t it exhausting but you have to realize it’s not all the time. My son is mostly busy doing other stuff and it’s more of a comfort thing, but it is really cute when they are nursing together. He just looks at her, and checks her out, and puts his hand on her little feet. It gives him this close-up intimate look at her, and it’s very beautiful to see them to kind of get to know each other. When a child is starting to be independent, to be able to come back to the mother and hold on, they are processing things when they are nursing. The world is a big place for us, imagine what it is for them. For children, it’s a nurturing, cuddly place to come back to that’s safe, where they can process the world that they are in. I see my son processing, and my daughter already; they sit, they look at you, they are safe, they have a moment to breathe, to be nurtured.